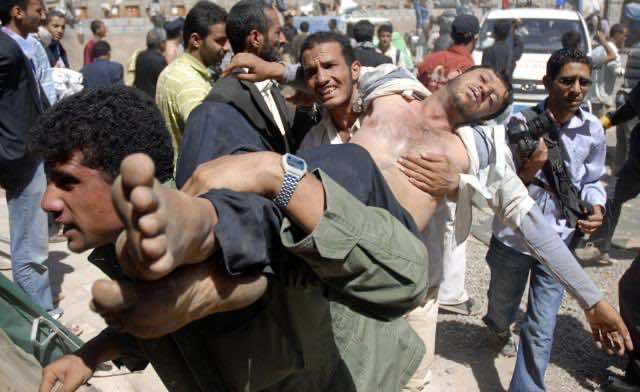 Smoke poured from buildings in the north of Yemen’s capital, Sana’a, amid gunfire and explosions, only hours after the declaration of a cease-fire between President Ali Abdullah Saleh’s government and two of his opponents.

An Al Arabiya correspondent said that intensive gunfire and shelling were also heard overnight in most of the northern neighborhoods of the city of Taez.

The states SABA news agency said the cease-fire agreement was to have been in force from 3 p.m. (1200 GMT) Tuesday to stop hostilities between Saleh’s forces and those of Sheikh Sadiq al-Ahmar, head of the country’s most influential tribal group, and General Ali Mohsen al-Ahmar, leader of an armored division that defected. Previous cease-fires have failed to hold.

“At least 12 people died in violence in Sana’a and Taez. That includes seven civilians killed by shelling in Taez and three soldiers who died in clashes with gunmen in the southern city,” according to an Interior Ministry statement carried by SABA late Tuesday.

After months of protests against Saleh’s 33-year rule, a standoff between him and an opposition made up of protesters, tribesmen and renegade soldiers tipped into street fighting last month. Previous truces collapsed.

State media earlier said the truce was stabilizing and a mediator expressed optimism it would hold.

“In spite of the violations of the ceasefire, the mediation committee is still … making contacts with all parties to implement the agreement. The issue is not easy but we are still optimistic,” the mediator told Reuters.

Saleh, defying hostile demonstrations inspired by protests across the Arab world, has refused to step down in line with a plan brokered by Gulf states. The United States and Saudi Arabia fear the upheaval is giving al-Qaeda’s local wing more room to operate in Yemen, the poorest Arab country.

In Washington, the State Department said Saleh called in U.S. Ambassador Gerald Feierstein to tell him about the ceasefire and his intention to sign the Gulf Cooperation Council transition plan for Yemen.

“We do consider it a good step, both that President Saleh is reaffirming his commitment to the GCC agreement and that he understands and is supportive of the fact that the violence has got to end so that we can set the conditions for discussions about Yemen’s diplomatic future,” Nuland told reporters.

Under the ceasefire mediated by a local committee, both sides agreed to dismantle armed checkpoints across the capital and release all of the people kidnapped during months of anti-government protests.

The agreement came four days after a United Nations Security Council resolution condemned violence in Yemen and urged Saleh to sign the Gulf initiative to hand over power.

Saleh, who welcomed the Security Council resolution on Monday, has backed out of the Gulf initiative at the last minute three times and says he will transfer power only to “safe hands.”