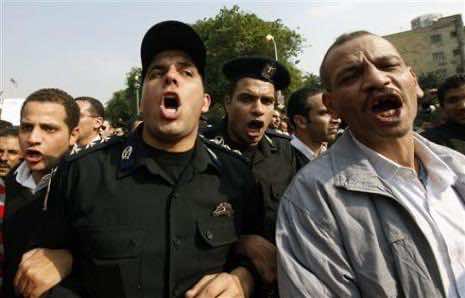 Police started a protest in front of the Interior Ministry on Monday and it has since spread to police stations around Egypt. Egyptian media said some had threatened not to work during a parliamentary election that starts on November 28.

The vote, the first free election in Egypt in decades, will take Egypt closer to a handover of power from the ruling military council to civilians. Voting in Mubarak’s era was often accompanied by violence around polling stations.

“Essawy went down to the street with the delegation after he fulfilled some of their demands and promised to respond to the rest,” it added.

The Interior Ministry said in a statement broadcast on state television on Tuesday that it would take all legal steps against efforts to disrupt police operations. It criticised those who were insisting on a sit-in, saying most demands had been met.

Some striking officers in the Sharkiya governorate in the Nile Delta north of Cairo had threatened not to protect polling stations next month should their demands not be met, the independent daily al-Tahrir reported.

Heavy-handed tactics by the police, who in Mubarak’s era routinely crushed any sign of dissent, fuelled the anger that led to the nationwide protests against the former president. When police lost control of the streets, the army was called in.

Egypt shook up the police force in July, dismissing more than 650 senior officers. Activists said this was a start but said a deeper overhaul was needed, including training.

Morale in the service has plunged. Many low-ranking officers typically depended on tips or bribes to make up for their low salaries and, since the uprising, many have been reluctant to return to duty because of public hatred of the service.

Police at the start of the uprising against Mubarak turned on protesters with water cannon, tear gas, rubber bullets and live ammunition.