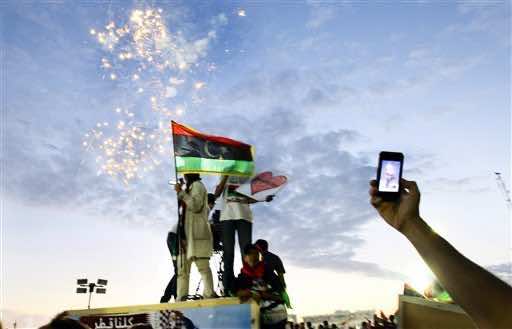 Tripoli – Libya’s new rulers were under growing pressure on Wednesday to respect the rights of their prisoners after a captured Moamer Kadhafi was felled by a bullet to his head and their fighters accused of summary executions.

The United Nations, human rights groups, the European Union, the United States and others all urged those now in command to respect the rights of their captives, amid raging controversy over the way Kadhafi died and the discovery of apparently-executed fighters loyal to the ousted dictator.

In response, the National Transitional Council (NTC) issued a statement late on Tuesday saying it attached “great importance” to ensuring the humane treatment of all its detainees and pledging to try those suspected of war crimes.

“Under the supervision of the ministry of justice, all cases and detention conditions will be considered and reviewed; fair trials will be guaranteed for those suspected of committing war crimes or criminal acts,” it said.

The corpses of Kadhafi, his son Mutassim and former defence minister Abu Bakr Yunis Jaber, had been on display in a market freezer in Misrata until their overnight burial on Monday that was kept secret to avoid turning the site into a rallying point for Kadhafi supporters.

The burials took place as the circumstances of the death of Kadhafi, shot dead after he was taken alive last Thursday during the fall of his hometown Sirte, raised questions over the future rule of law and fears for the fate of other captives.

A UN human rights team set up to investigate rights violations in the north African country said the NTC and armed groups should ensure that all prisoners are treated in line with international norms.

“In particular, I call on all the armed forces to avoid any act of reprisal and arbitrary repression against both Libyans and foreigners,” Philippe Kirsch, head of the International Commission of Inquiry on Libya, said in a statement.

The commission also welcomed decisions by the new rulers to probe the deaths “of certain detainees” — an apparent reference to Kadhafi.

For some, the inquiry would already be too late.

The discovery of 53 decaying bodies in Sirte, Kadhafi’s final bastion, suggests some of his loyalists were executed, Human Rights Watch (HRW) charged.

“We found 53 decomposing bodies, apparently Kadhafi supporters, at an abandoned hotel in Sirte,” said Peter Bouckaert of HRW, who investigated the killings at the Hotel Mahari, an area held by anti-Kadhafi fighters “before the killings took place.”

“Some had their hands bound behind their backs when they were shot,” he said.

The United States described the report of summary executions as “extremely disturbing”, urged Libya to uphold human rights and called on its leaders to respect the rights of women after Mustafa Abdel Jalil, the interim leader, spoke of imposing Islamic sharia law, including polygamy.

Abdel Jalil said in a speech to the nation on Sunday that “any law that violates sharia is null and void” and pointed specifically to restrictions on polygamy that were imposed under Kadhafi.

“We seek a democracy that meets international human rights standards, that provides a place for all Libyans and that serves to unify the country,” Nuland said.

The European Union also called on Libya to respect human rights after the comment on sharia. Abdel Jalil sought to reassure the West afterwards by saying that Libyans are moderate Muslims.

France, which spearheaded the international community’s effort to support those revolting against Kadhafi’s rule, said it would be “watchful of respect for human rights and democratic principles, notably cultural and religious diversity and the equality of men and women.”

In Geneva, the UN human rights office welcomed Libya’s announcement of a commission of inquiry to probe the controversial killing of Kadhafi, while stressing the need for due process in the treatment of all detainees, in accordance with international law.
Spokeswoman Ravina Shamdasani reiterated UN chief Ban Ki-moon‘s call on all sides in the conflict to avoid reprisals, saying it was a time not for revenge, “but for healing and rebuilding.”