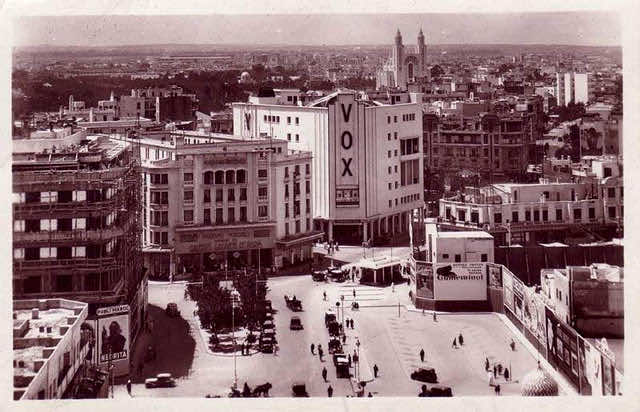 Walking by the the Cinema Boujloud in Fez is a sad experience for anyone who loves old movie houses. This once bustling cinema is closed and used for storage of market goods. The seating was still in place in the auditorium when seen in 2006. Cinema Boujaloud is symptomatic of the Moroccan cinema market which has been suffering a severe decline during the past years.

The rich heritage of Moroccan cinemas is endangered, but those who care about the future of film and their architectural value are working hard to save them, writes Derek Workman.

In 2007, Moroccan actor Tarik Mounim was in Tetouan waiting on a film set between takes. He was appearing in Goodbye Mothers, Morocco’s entry for the 2009 Oscars in the Best Foreign Film Category – which tells the story of the Jewish exodus from Morocco in the 1960s. While he waited for his scenes to be shot, he looked around the Art Deco cinema Cine Español, said to be the most beautiful in Morocco. He got to chatting with the owner, of the Español and two other cinemas in the city. It might seem pretty good, owning three cinemas, the owner told him, but it is a far cry from the twenty-five that his grandfather owned throughout the country.

“Speak to any older Moroccan and they will tell you that the cinema was a major part of their life,” Tarik says. “It was at the physical heart of a city or the neighbourhood, it was where people met and passed the time, it was where they learned about the world and heard new words. It was their encyclopaedia.”

Tarik had spent seven years studying to be an actor and working in theatre in Paris, and had only recently returned to Morocco. As far as he was concerned, he was there to work, but he began to discover in just how parlous a state Moroccan cinema was; not just the production of movies, but the crumbling structures themselves, many of which had been built in the 1930s to 1950s at the height of the Art Deco period. (Miami is recognized as having some of the most beautiful art deco architecture in existence, but at its height it had only around five percent of art deco buildings that Casablanca had, many of the most beautiful of which were cinemas, and sadly, much of it now lost.)

“In its heyday, twenty-five distributors brought films from France, Egypt, India, China, the USA, and Great Britain,” he says. “It is the only country in the world with cinemas that had the capacity to hold 1,500 people; the biggest could seat 2,800. In the 1960s there were more than fifty million tickets sold a year, in 2010 there were only two million sold, and where once there were 280 cinemas operating throughout the country, now there are only thirty-seven, most of them showing movies from Bollywood.”

It’s the story of cinema worldwide, but where many countries replaced the neighborhood movie houses with out-of-town multiplexes, this didn’t happen as much in Morocco, as the entrance price was simply prohibitive to most people.

There’s now a whole generation that has no idea what it’s like to visit a cinema, to enjoy the romance, the spectacle, the sense of wonder that the big screen brings. Now they sit at home watching a bootlegged DVD.

In 2008 Tarik and a group of friends formed Save Cinemas in Morocco (SCIM) in time for the International Film Festival of Marrakech, one of the biggest events devoted to Moroccan cinema. They convinced some of the actors, directors and other participants to wear their distinctive black T-shirt with its deep red logo, and people began to take notice. To encourage local interest they began showing old films in abandoned cinemas during the festival so that people in the Medina could see what it was like to visit the local ‘flicks’. Entrance was free, and they played to packed houses.

“The first film we showed was on original equipment from 1956 and it was wonderful, just like going to the movies decades ago – although some of the seats were a bit uncomfortable after so many years! Everyone had a great time, and each year during the festival we do the same. We even have people who are visiting the official festival coming to watch.”

Even though there are only thirty-seven cinemas still showing movies on a regular basis, there are one hundred and sixty still in existence throughout the country, although most are now falling into ruin. But it isn’t just the buildings themselves that is the problem; a lot of the seats and fitting are now missing, and it is increasingly difficult to find projectors and other equipment needed to restore a cinema to working order.

“We’re looking for help worldwide from people who can either help us with equipment or expertise,” says Tarik. “We did a presentation at the Cannes Film Festival this year, which went down really well, and we’ve been offered help by Unifrance, a French film association. We’ve still got a long way to go, though.”

Saving the architectural heritage of Art Deco is worthy in itself, but Save Cinemas in Morocco wants to go beyond that. Every cinema that is saved is a venue for a young film-maker to show his work. At a time when international producers are bringing fewer and fewer projects to Morocco, the Moroccan film industry is finding itself in almost as perilous a state as the cinemas it now no longer uses. Once hearts of the community, these could be a way of breathing life into the neighborhood and give future Steven Spielbergs the chance to have their work flicker across the silver screen.

First Published in The View From Fez