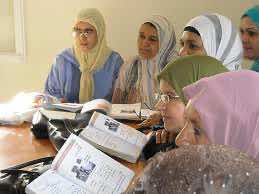 Literacy classes have changed the lives of many Moroccans. Omari Zohra, a 45 year-old mother of four, said she found it hard to imagine how she could have lived for forty years without being able to read or write. Once her children grew up, a gulf opened up between them because of her illiteracy. That was until her husband suggested she go to literacy classes. Initially, she thought it a strange idea.

“Sitting there at a school desk when I was going on forty seemed impossible to me. All the same, I decided to take up the challenge. Five years on, I can read and write well. My children have given me a lot of support at home and have helped me practice,” she said. “Now I’ve decided to take on French.”

There are five million people just like Zohra who have learned to read and write over the past eight years. The number of people receiving tuition aid for literacy classes has risen substantially over recent years, from 286,000 in the 2002-2003 season to nearly 700,000 during the 2010-11 season. As a result, the illiteracy level in Morocco has dropped from 43% in 2004 to around 30% in 2010, according to the government. Women make up 83% of those benefiting from literacy programmes. The majority of them come from rural areas.

The director of the anti-illiteracy campaign, Habib Nadir, said that authorities have been able to meet the challenge in terms of numbers over recent years. The state’s target is to bring the level down to 20% in 2015 before completely eradicating the problem by 2020, according to Nadir.

The government’s aim is to tie in anti-corruption programmes with increased involvement in the jobs market, according to Nadir. As part of those efforts, 13,000 instructors have received training on various literacy-related topics, and 1,200 NGO managers have benefited from training sessions on how to set up and manage literacy projects.

Work has also been done on the quality of programmes, particularly the design of course books to meet the needs of those enrolled on the programmes, along with the introduction of national schemes to evaluate and certify literacy programmes.

Some observers consider the literacy budget to be modest. It stands at 200 million dirhams per annum. Two-thirds of the funding for the programme comes from the state and the remainder is in the form of foreign contributions, such as the European Union literacy aid package. The project has contributed more than 60 million dirhams a year to Morocco since 2008.

But the European Union seems to be unhappy with the rate at which illiteracy is being stamped out in the kingdom.

European Union ambassador Enedo Landaburu said at an October 13th meeting in Rabat that despite the efforts made to stamp out illiteracy, progress still falls short of the EU’s expectations.

He called for the pace of the programme to be stepped up, because “illiteracy is an unwelcome stain on the way in which Morocco is viewed, and it really holds back its economic and social development.”