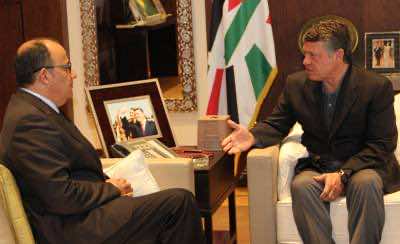 The good thing about being appointed a minister in Amman, many Jordanians joke, is that everyone gets the chance to be one at some point. Indeed the kingdom’s approach to government has, at times, seemed like a revolving door. Last week, for the second time since the Arab Spring began earlier this year, another government was replaced.

The appointment of Awn Khasawneh, an international legal expert, to the post of prime minister is the latest indication that King Abdullah II is listening to calls for an end to corruption and a greater voice in the political process. But more is needed. Mr Khasawneh is the fifth prime minister in six years, and the second since February.

Yet as protests continue in Jordan, the question is not whether Mr Khasawneh is the best man for the job, but rather, what he will be able to accomplish.

Reform has been an agenda item for years. In 2005, King Abdullah launched the Jordanian National Agenda, a strategy of economic overhauls to transform the state’s financial system, create employment opportunities in labour-intensive industries and build new infrastructure. This approach, together with periodically changing ministers, has given a sense of responsiveness. And this month the government set municipal elections for December 27. But Islamist parties say they will boycott unless parliament is given greater powers.

Here, Morocco offers some important lessons. In March, Morocco’s King Mohammed VI called for constitutional changes to empower the elected legislature and create a more independent judiciary. In addition, efforts have been made to enshrine these changes in a framework bound by law rather than fiat. These changes, presenting voters with a greater say in the country’s affairs, have won praise at home and abroad.

Jordan, too, will have to grapple with deep structural reforms. Many Jordanians are frustrated by corruption and economic inequality. Roughly 13 per cent of the country lives on less than 680 Jordanian dinars (Dh3,500) a year. And according to the International Monetary Fund, unemployment is officially measured at 12.5 per cent, higher than Egypt’s 9.2 per cent before that country’s revolution.

Much as in Morrocco, protests have not called for the king to step down, and indeed the king is seen the main driver to reform. Last week, he told a World Economic Forum meeting in Amman that “the Arab Spring has been an opportunity to move our nation’s interests forward”. Morocco offers one possible model.