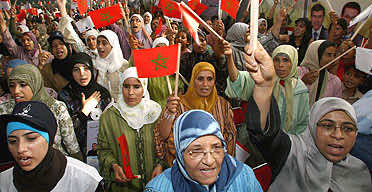 We are seeing, across the coast of North Africa, the hopes of the “Arab Spring” dissolving into sporadic mob violence, often against religious minorities (Egypt); civil war (Libya); the rise of Islamist militants (Egypt, Libya and perhaps Tunisia); and unrestrained repression (Algeria). The sole exception on the North African coast is Morocco.

In Morocco, we see no violence, no compulsory rise of extremists, and no police repression. Instead we see spirited political debate and, set for this year, a string of elections. The latest, scheduled for November 25, will select — for the first time in the history of the region — the first parliament fully empowered to govern an Arab state.

Why is Morocco the exception?

Morocco is the exception in North Africa because its ruling class did not defy the will of the people, but channelled it into practical political change.

The country was already in the process of a 15-year democratic transition when the Arab Spring movements arrived. With the accession to the throne of King Mohammed VI in July 1999, the pace toward full democratization accelerated. Over the past decade, elections were held for a bicameral parliament, the powers of which gradually grew. Some 35 political parties emerged to promote candidates for local and national offices. Further, in 2011, when the “Movement of February 20” — Morocco’s version of Arab Spring — produced large and largely peaceful demonstrations, Morocco was already on its way toward democracy. Faced with demonstrations, the king wisely decided to accelerate reforms.

King Mohammed VI announced, on March 9, 2011, that a new, more democratic constitution would be drafted and presented to the people to be voted on in a referendum. When the constitution was unveiled, it represented a genuinely radical step forward: a directly-elected chief of government; an elected bicameral parliament with effective control over taxes, budget and all other domestic issues; consolidated rights for women; and rights for religious minorities, including Christians and Jews. The proposed constitution pointedly ended a cultural debate by putting the language Amazigh on par with Arabic in schools and other government institutions. The constitution was passed overwhelmingly in July.

Now the political map of Morocco will be remade, not by violence, but by votes. Some fear that the November 25 elections will produce a radical Islamist government — as Algeria’s 1992 elections, which sparked more than a decade of bloody civil war — threatened to do. According to a confidential analysis from a reliable American source, however, the elections in Morocco are likely to produce a much happier outcome.

While Morocco has some 35 legally constituted parties, an examination of every parliamentary election since 2002 shows that a dozen of them win virtually all of the votes and parliamentary seats. In the 2009 elections, for example, the top dozen parties won 88% of the vote and 93% of the seats.

The other 23 parties won fewer votes and fewer seats because they sprang into existence only during the approach of an election. Between elections, these minor parties did not appear in the press, hold rallies or otherwise announce their existence to voters.

The dominant dozen political parties are well-organized, hold regular meetings throughout the country and use the media to argue their views. The “dominant dozen” should extend their share of the votes and parliamentary seats again — winning roughly 90% of the vote and 96% of the seats this November.

As for other parties, the National Rally of Independents (RNI), should command at least 12% of the vote. The Istiqlal Party (PI), which currently leads the government, is projected to reach 11%, depending on voter turnout. And the Authenticity and Modernity Party (PAM), a 2008 merger of five political groups, is, at 10%, predicted to come in third.

The Islamist party, the Party for Justice and Development (PJD), is not expected to enlarge its share of the parliament’s lower house — placing it, behind the RNI, IP and PAM with 9% of the vote.

Despite its charismatic leaders and ample funds, the Islamist PJD remains at its 2007 ceiling because of a number of factors:

Its base of support is narrow and competitive. The Islamist party attracts mainly young, educated, middle-class city dwellers. The middle class is itself small compared to the whole of the Moroccan electorate, and the PJD, failing to command even a majority of the middle class, has to fight for votes from other minor Islamist and, ironically, Socialist parties.

Oddly, the average PJD voter indeed looks a lot like the voters for the Moroccan Socialist Party (USFP). Although both draw on an young and educated base, urban voters frequently switch between these seemingly sharp alternatives, the Islamists and the Socialists.

The Islamists have almost no support in rural areas. The PJD has not made a major investment there and consequently wins almost no votes. Meanwhile, the RNI, the PI and PAM have won over local and tribal leaders, and have devoted significant attention to rural issues. As a result, the RNI, PI and PAM harvest the vast majority of rural votes.

Finally, other parties have been stealing the PJD’s best ideas. While the PJD is largely powerless in opposition, the parties in power have focussed on issues that once made the PJD attractive, especially in the areas economic reform and job creation.

It seems that the November elections will simply underline the trends of the past decade. The RNI, the PI and the PAM look better positioned to compete for a poll position. Which party, among these, will be able to form a coalition to shape a government remains to be seen.

As far as the PJD is concerned, however, it is far from being the overwhelming political force.