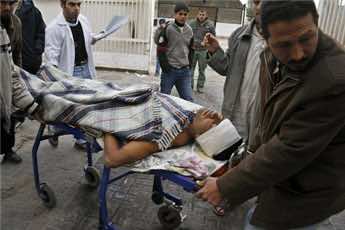 A Moroccan plane took off from the Benghazi airport on Thursday morning carrying a first group of 58 wounded to the Kingdom to receive medical care.
The plane had carried on Wednesday a medical team that visited the central hospital of Benghazi and the hospitals of Al Jalae and Houari.

During these visits, the team identified the wounded who need to be transferred urgently to the Moroccan hospitals.

The team is expected to visit Tripoli to identify similar cases for evacuation to Morocco. Afterwards, it will visit Misrata.

The Libyan officials, the wounded and their families commended this royal initiative towards the Libyan people.

Morocco was among the first countries to express support for the Libyan revolution, ever since the creation of the National Transitional Council, which the Kingdom recognized as the unique, legitimate representative of the Libyan people.

It also set up a makeshift hospital and sent important humanitarian aid and medical equipment to the camps pitched for refugees near the Tunisian border.