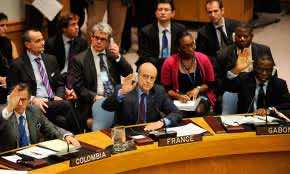 The UN Security Council wants to quickly end its authorization for a no-fly zone and NATO action in Libya despite the country’s calls for a delay, diplomats said Wednesday.

Many countries on the 15-member council want NATO to stick to its plan to end its Libya mission on October 31 and want a Security Council resolution ending its authorization voted this week.

Libya’s interim leader Mustafa Abdel Jalil on Wednesday urged NATO to continue its Libya campaign until the end of the year, and the National Transitional Council may formally ask the Security Council to delay a decision, diplomats said.

UN Security Council approval in March for a no-fly zone and military action to protect civilians has caused divisions on the 15-nation body ever since. Russia, China, South Africa, Brazil and India have accused NATO of going beyond the mandate with the air strikes against strongman Moammar Qaddafi.

French ambassador Gerard Araud said a draft Libya resolution should be sent to council members on Thursday and a vote would quickly follow.

“A lot of countries want to put an end to this military operation,” said Araud. “The majority of the council want to move forward” with a vote.

He said an October 31 end to the mandate was not certain but very likely, despite the Libyan statements.

Russia’s UN ambassador Vitaly Churkin said an extension past October 31 would be “unrealistic.”

Following Jalil’s comments, Libya’s deputy UN envoy Ibrahim Dabbashi told a Security Council meeting on Libya that the transitional council may have to ask for an extension of the mandate.

Dabbashi said October 31 was a “logical date” to end the mission and that Libya’s population was “looking forward to terminating the no-fly zone over Libya” as well as the mandate to protect civilians.

He said the Libyan national armed forces were not yet ready to take on national security and the government was also deciding whether it could monitor its borders following the end of the Qaddafi government.

“We wish to ask you not to be hasty in adopting a resolution and we will inform you of the official decision of the NTC, which we hope will be done by the end of this month,” Dabbashi told the meeting.

Libya’s UN mission had previously written to the Security Council asking for the no-fly zone mandate to end on October 31, diplomats said.