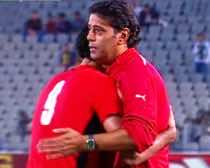 Egypt U-23 team has withdrawn from participating in the North Africa U-23 tournament scheduled to take place from 1st to 7th of November in Morocco. The tournament was set up to give good preparation to the three North African teams (Morocco, Algeria and Egypt) playing in the first ever U-23 African Championship which will serve as the qualifier for London 2012 Olympics football tournament. The Championship is to be played at the end of November in Morocco after original hosts pulled out of holding the competition. The other teams in the North Africa U-23 tournament apart from host Morocco are Saudi Arabia, Algeria, Qatar and Niger.

Egypt U-23 team director Alaa Abdul Aziz told Cafonline.com that Egyptian football association is not able to accommodate the tournament without heavily affecting the Egyptian league schedule. Egyptian clubs refused to release their U-23 players for this friendly tournament. U-23 coach Hany Ramzy was not successful in his attempt to convince the competitions committee to postpone the week 7 league matches to give the team the appropriate time for preparations.

Meanwhile the Egyptian senior team will face Brazil in Qatar on November 14th in new coach Bob Bradley‘s first match in- charge of the Pharaohs. After pulling out of the Morocco friendly tournament the U-23 staff are looking at arranging two friendlies with Senegal either in Cairo or Alexandria on November 15th and 17th before leaving to Morocco where they will go into a camp before the U-23 African Championship which will run from 26th November to 10th December.