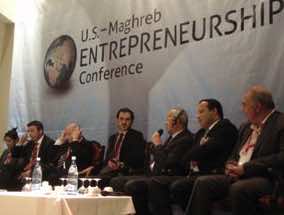 The U.S. Department of State and Partners for a New Beginning (PNB) are hosting an Entrepreneurship Delegation to Morocco, Algeria and Tunisia from October 27-November 2, 2011 as part of the U.S. – North Africa Partnership for Economic Opportunity (PNB-NAPEO). The goal of the delegation is to foster and deepen relationships between U.S. investors and entrepreneurs and their local counterparts in emerging markets and showcase local talent in the Maghreb. The highlight of the event will be the selection of three starts ups, one from each Maghreb country, to receive a residency and scholarship prize.

Organized in partnership with PNB-NAPEO local advisory boards in each country and managed by the State Department’s Global Entrepreneurship Program (GEP), the delegation consists of 12 prominent U.S. investors, role-model entrepreneurs, and academic leaders with experience in angel or venture investing and/or track-records as successful entrepreneurs and mentors. Some delegates are members of the Maghreb Diaspora living in the United States. The delegation’s over-arching theme will be “innovation,” defined broadly to include business sectors such as information technology, clean-tech, bio-tech and ag-tech. Many of the delegates will be technology entrepreneurs and investors from Silicon Valley, but also include representation from across the United States, including Detroit, Michigan, home to the largest Arab-American population.

Source: US Department of State