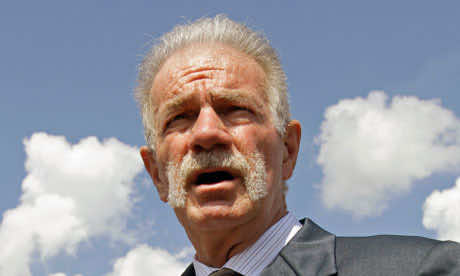 The controversial pastor who infamously threatened to burn the Quran as a response to the tragedy of 9/11 is in the spotlight again; Terry Jones is joining the field of candidates for the 2012 American presidential race.

In a press release announced Wednesday morning on his Stand up America website, Jones outlined his candidacy in line with a seven point agenda, which includes deportation of all illegal immigrants and the immediate return of all troops home.

He tweeted that “We want to encourage Americans to stand up. Our nation is only a few years away from a total breakdown unless we stand up now.” On matters of immigration he announced that “We have forgotten what the word ‘illegal’ means. Illegal means illegal. All illegals must be deported.”

The Florida based pastor first made international headlines in September 2010 when he tried to organize a “Quran burning” day to honor and remember those who were murdered on 9/11. His plan of a “burn a Quran” day was called off after president Obama urged him not to burn the holy book of Muslims as this “stunt” could cause a threat to Americans, in particular for US forces abroad. Jones canceled the event, but ultimately followed through with his plans to burn the Quran in March, This sparked worldwide rage and protest, namely in Afghanistan.

He is currently running as a republican candidate.