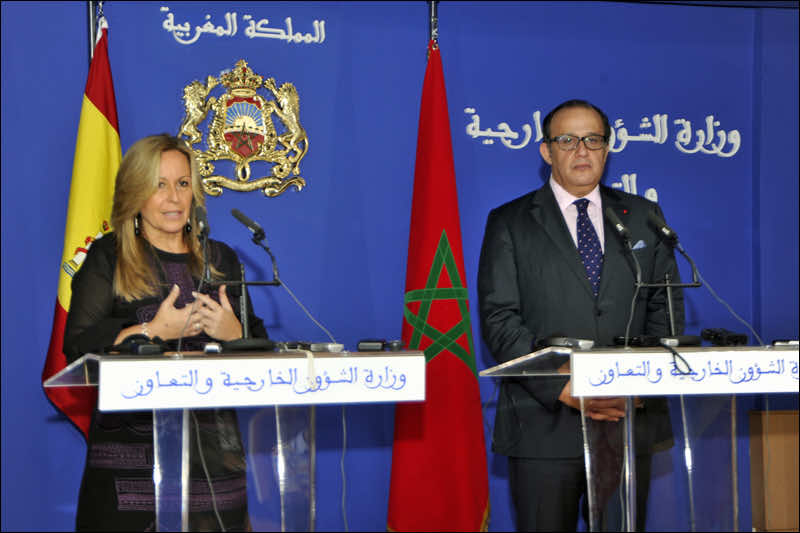 “We have a strong relationship on this issue. We have always worked well together in the fight against terrorism,” Jimenez said.

Her visit came two days after the kidnapping of European aid workers from a Polisario-run refugee camp in Rabuni, near Tindouf. The hostages were identified as Italian Rossella Urru and Spanish NGO workers Enric Gonyalons and Ainhoa Fernandez de Rincon.

Spain is “working hard with other governments in the region to get these hostages freed”, Jimenez said. She pointed out that there was “no official confirmation yet of who was behind the act”.

“All the countries in this area have information. It is important to co-operate,” the Spanish official added. “Security must be tightened in all areas where there are foreign workers.”

For his part, the Moroccan minister blamed al-Qaeda in the Islamic Maghreb (AQIM) for the kidnapping. The nature and type of activities of the terrorist group have evolved over recent years, and the risk is greater today because of AQIM’s ties with other regional terror groups, like Somali al-Shabab movement, Fassi Fihri said.

“AQIM’s expansion is a cause of concern for all of us,” he added. “Without real regional co-operation between the various countries in the region, of which there are many, and the western nations, we shall never overcome terrorism.”

To keep the region secure, countries need to lay the foundation for a real military co-operation and information exchange, according to international relations expert Mohamed Boujmaa. Al-Qaeda’s North African branch is gradually extending the geographic range of its terrorist activities, he added.

To counter the terror threat, Algeria and Morocco must forget their political differences and work together to establish security and stability, Boujmaa concluded.