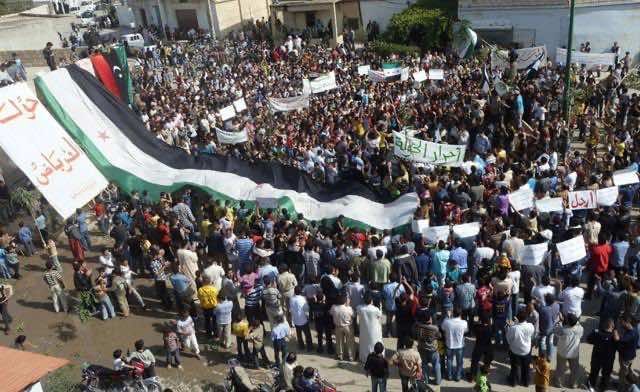 At least 20 civilians were killed by Syrian security forces on Friday as they pursued a crackdown against anti-regime protesters across the country, a rights group said.

“Eight civilians were killed in various neighborhoods of Hama, 11 others in the city of Homs and one civilian was killed in Qusayr, in the region of Homs,” the Syrian Observatory for Human Rights said, updating an earlier toll.

Hama and Homs are at the front line of the anti-regime protests that have rocked Syria since mid-March, since when UN estimates say more than 3,000 people, most of them civilians, have been killed in security crackdowns.

The army has been carrying out operations in Qusayr for several weeks, amid fighting there between troops and suspected army deserters, activists have said.

Clashes were also reported in Hama on Friday between suspected army defectors and members of the regular army and the security forces.

The latest bloodletting comes as activists called for nationwide protests on Friday to demand the imposition of a no-fly zone over Syria to protect civilians.

“A 15-year-old minor was killed and three people were wounded by security forces during raids” in Dael, a protest hub near the southern city of Daraa, the Syrian Observatory for Human Rights said.

On Wednesday, more than 5,000 people in Dael called for the fall of the regime of President Bashar al-Assad, the Observatory said, adding that 23 people were arrested there.

In the central region of Homs, another hotbed of dissent, two civilians were killed, one shot by sniper fire, a statement from the Britain-based watchdog said.

Further north in Hama five civilians, including a 12-year-old boy, were killed by heavy machine gun fire, the Observatory said.

The Local Coordination Committees, an activist network spurring protests on the ground, said security forces entered several towns to the east of Damascus looking for people “on the basis of lists.”