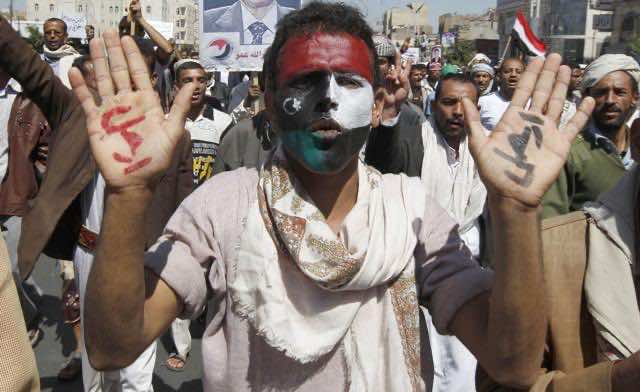 The head of the anti-terror force in Yemen’s restive southern Abyan province was killed Friday when a bomb planted in his car exploded, a Yemeni security official said.
Three others, including two children, were wounded in the blast that killed Ali al-Haddi near the coastal city of Aden.

Security has broken down across Yemen during the nine-month popular uprising seeking to oust longtime autocratic President Ali Abdullah Saleh. Demonstrations raged around the country on Friday.

Al-Qaeda linked militants have taken over a number of towns in Abyan, along the country’s south coast, where they regularly engage in deadly clashes with security forces. Yemeni authorities also accuse them of targeting security officials.

The official spoke on condition of anonymity because he was not authorized to talk to reporters.

Tens of thousands marched in anti-government demonstrations across Yemen Friday. Protesters have been on the streets practically every day since January, despite bloody government crackdowns.

Thousands also marched in the capital Sana’a, where government troops have been clashing with soldiers who have joined the protests and armed men loyal toYemen’s most powerful tribal chief, who supports the opposition.