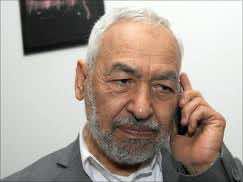 Officials from Ennahdha, Tunisia’s newly elected moderate Islamist party, have announced the intention to form a coalition government within the next 10 days.

Party secretary-general Hamadi Jbeli said on Friday that Ennahdha had begun talks with other parties on forming a coalition government.

He said the priority in the talks would be reviving the country’s economy.

“We are going to speed up to build the new government … It will take between a week and 10 days,” Jbeli, likely to be prime minister in the new cabinet, said.

The party’s leader, Rachid Ghannouchi, said his party would honour an undertaking to finish writing a new constitution within one year, saying: “This government will look to establish common grounds through providing a government plan proposal for a year.”

In Sunday’s national election, Ennahdha won 41.5 per cent of the votes and took 90 seats in the assembly that will rewrite the constitution and appoint a president and a caretaker government.

The party was banned under Zine el Abidine Ben Ali’s regime and registered as a political party in March.

After election results were announced on Thursday, hundreds of people marched on the Sidi Bouzid headquarters of Ennahdha, burning tyres and pelting security forces with stones.

Tunisian security forces reportedly responded by firing into the air to try to disperse the angry crowd, witnesses say.

The Ennahdha party leader accused forces linked to the country’s ousted president of fanning the violence, and called for “calm and the preservation of public property”.

“Protesters have basically been on the rampage, burning down the mayor’s office, also setting fire to a court and attempting to get into the headquarters,” she said.

“There have been some arrests and teargas has been fired.”

The interior ministry has announced that a curfew will be imposed from 7pm (18:00 GMT) on Friday to 5am (04:00 GMT) on Saturday morning in Sidi Bouzid.

The town was the cradle of the uprising that drove Ben Ali from power in January.

Local vegetable seller Mohamed Bouazizi set fire to himself in December, in an act of protest against officialdom which
unleashed the revolts around the Arab world.

After the elections, supporters of a party popular in Sidi Bouzid were angered that it had been eliminated from the ballot over allegations of campaign finance violations.

Aridha Chaabia, or the Petition for Justice and Development, was placed fourth in the voting, but election officials cancelled several of its seats over alleged campaign finance violations.