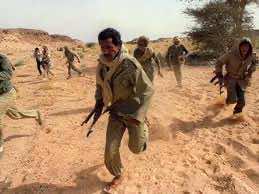 While mystery still surrounds the kidnapping of the three Europeans on Sunday near Tindouf, in Algeria, several Italian and Spanish prestigious newspapers are trying to disclose circumstances of the operation, raising doubts about suspicious relations between Al Qaeda in the Islamic Maghreb (AQIM) and the polisario.

After “La Nuova Sardegna”, “El Pais” and “enPrimicia”, whose accounts of the event confirmed that the kidnappers received, in a way or another, help from within the well-guarded polisario-run camps, this time it is Italy’s widely read daily “Corriere della Sera” which further reinforces these doubts.

The newspaper said Friday that the three westerners “are between the hands of Al Qaeda’s Sahrawi franchise in the Islamic Maghreb (AQIM),” whose leader, Hakim Ould Mohammed M’barek, is a former member of the polisario who joined forces loyal to the Emir Al Jawadi, one of the Al Qaeda leaders in the Sahara.

Ould Mohammed M’barek, added the daily, was arrested in Bamako in 2008 and transferred to Mauritania, before he “had admitted during the interrogation that there are AQIM centres of indoctrination and recruitment in the camps (Tindouf) in Algeria.”

Echoing what “Corriere della Sera” wrote, Spanish prestigious daily “El Pais” said Wednesday that the Kidnappers could not have carried out their operation without benefiting from the support of the polisario security apparatus.

“El Pais”, citing well-informed sources in the area, made it clear that “to cross the checkpoints of the Algerian army and the polisario, the kidnappers benefited from the support of polisario’s military.”

The pan-African daily “le Griot.info” also seems to agree with “El Pais” accounts of the operation. It reported, according to some influential sources within the polisario, that the abduction could not have happened without “internal complicity.”

For the daily, which based its analysis on a U.N. “confidential” document that reveals that the U.N. Under-Secretary-General, Gregory Starr wonders how come that “the kidnappers, from Mali, managed to enter the (polisario) camp deemed extremely well guarded by the Algerian army?”