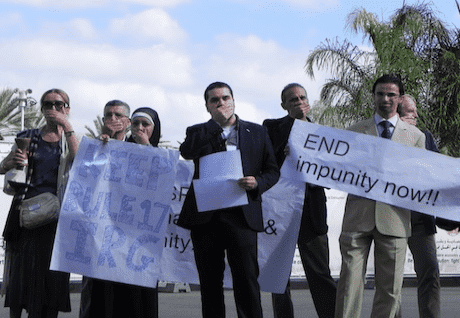 MARRAKESH, Morocco – Campaigners on Friday accused governments at a major U.N. conference on corruption of excluding civil society from fully participating in reviewing how states are doing in enforcing the world’s biggest anti-graft convention.

More than 150 countries have ratified the U.N. Convention Against Corruption (UNCAC), and the results of a review into how 26 of them are doing in implementing the treaty were discussed at the week-long conference in the Moroccan city of Marrakesh.

Campaigners and experts say the review process is shrouded in secrecy, while the lack of a mechanism to “name and shame” the countries doing least to fight sleaze raises question marks over UNCAC’s impact.

Civil society organisations attending the talks campaigned hard to be allowed to attend discussions by the convention’s main review body — the Implementation Review Group (IRG), which assesses whether governments are living up to their obligations under the convention.

But the conference ended without a commitment to broaden access for civil society, which campaigners say is all the more surprising after recent popular uprisings of the Arab Spring.

“The decision not to include civil society leaves things dangerously open-ended during a critical period in which the convention review process is still being shaped and when there is a need in the region and beyond for a strong and inclusive convention,” Slagjana Taseva, chair of the UNCAC Coalition, a global network of civil society organisations, said at the end of the talks attended by more than 1,000 delegates.

A decision by the conference to give civil society briefings after IRG meetings was a poor compromise, Taseva said.

UNCAC explicitly recognises that anti-corruption efforts must go hand-in-hand with transparency and civil society participation, but some governments, said by sources to include Russia, China, Algeria, Cuba and Ecuador, reject this notion.

A source close to the negotiations said that the problem stemmed mostly from diplomatic horse-trading.

“Nobody wants to rock the boat here even if they do not reject the idea of civil society participation in principle,” the source, who requested not to be named, told TrustLaw, a legal news service run by the Thomson Reuters Foundation.

Christiaan Poortman, senior advisor at anti-graft watchdog Transparency International, said the decision was a setback for the global fight against corruption.

“It is tragic that the momentum provided by the Arab Spring on the return of stolen assets did little to solidify the role of civil society in the convention enforcement, although a strong citizen voice was the central element of the uprisings in the region,” said Poortman.

Yury Fedotov, executive director of the U.N. Office on Drugs and Crime, which serves as the secretariat for UNCAC, said the conference had taken steps to ensure that civil society could begin to effectively contribute to the review process.

“I expect we will return to this issue again as we have more confidence in the process of review,” Fedotov said in his closing statement.