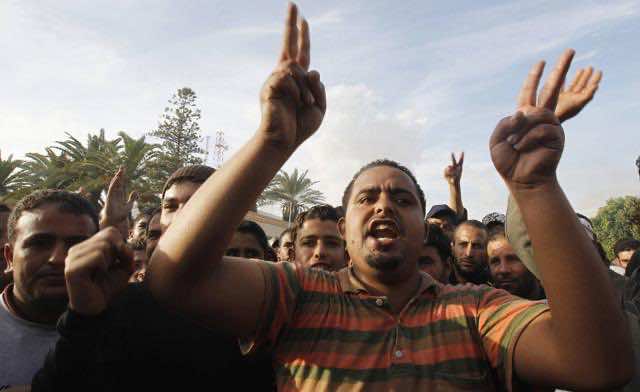 Calm returned Saturday to Sidi Bouzid, the birthplace of the Tunisian revolution, after an overnight curfew imposed because of violent post-election protests, police said.

“There were no incidents during the night,” a police official said.

The town’s weekly market was open, and residents were going about normal activities as teams worked to clean and repair public buildings vandalized during two days of unrest over the disqualification of some candidates inTunisia’s first free elections.

A few tanks remained stationed by the police headquarters and town hall, however, and schools remained closed.

Late Friday, Hechmi Haamadi, a businessman whose Popular Petition won in Sidi Bouzid, appealed on the town’s residents to halt the protests, echoing an appeal by the head of the Islamist Ennahda party which won Sunday’s polls.

Tension had remained high late Friday despite the curfew, as disgruntled groups were threatening further damage and the army boosted patrols in the town, an AFP correspondent reported.

He died days later, but Bouazizi’s desperate act sparked the popular revolt that toppled Ben Ali less than a month later and ignited region-wide uprisings that have since also ousted strongmen in Cairo and Tripoli.

The leader of Ennahda accused forces linked to the ousted president of fanning violence there.

The local Ennahda bureau was among buildings burned in the unrest. Police lobbed tear gas to disperse a crowd of up to 3,000 people on Thursday night and the army fired warning shots, according to town resident Mourad Barhoumi. Residents burned tires, pillaged some stores and torched a National Guard post and a state training center.

The protests were linked to the Popular Petition party when its leader, Hamdi, announced on national television that he was withdrawing the 19 seats his party won after the electoral commission invalidated six of its seats.

Hamdi, owner of the Mustaqila satellite television channel based in London, had broadcast promises to give Tunisians free health care, new factories and thousands of jobs.

Electoral officials ultimately invalidated five lists tarnished by financing violations and one led by a former member of the ruling party – now banned.

Leader of Ennahda, Rachid Ghannouchi, has promised to create a broad-based coalition as it works to form a government to replace interim leaders who have run Tunisia since ousted Ben Ali fled to Saudi Arabia on Jan. 14, chased away after a month of protests.