By Ademe Amine and Walid Ramzi 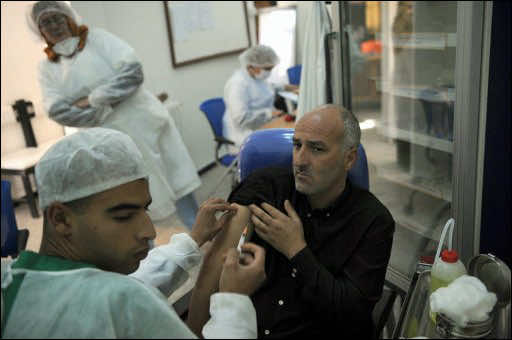 By Ademe Amine and Walid Ramzi

Scarce medical supplies and unavailable treatments are taking a heavy toll on Algeria’s patients. The threat is particularly acute for those diagnosed with fatal diseases.

“Out of 44,000 new cancer cases recorded every year in Algeria, 28,000 require radiotherapy treatment,” professor and oncologist Kamel Bouzid said. “At the moment, the country only has the resources to treat 8,000.”

“The radiotherapy service has been in a calamitous state for months, if not for years. Although the Pierre et Marie Curie Centre is up and running, I can tell you now that because of maintenance problems patients registering with us now have to wait until June 2012 for an appointment,” Bouzid said on national radio in early October.

Worse still, he revealed that “80% of cancer patients who do not turn up for their appointment, which can take between six and eight months to come through, have simply died because of a lack of treatment”.

Kidney disease patients also suffer from lack of supplies. “Some antiviral drugs and other products are lacking in university hospitals, resulting in deaths, as we have seen in Oran and Constantine,” National Federation of Kidney Failure Patients (FNIR) chief Boukhars Mohamed said in July.

A month later, medicines to treat AIDS patients disappeared from pharmacies in the west of the country, causing a huge outcry. Health Minister Djamel Ould Abbes explained that many pharmaceutical distributors “do not meet requirements and are simply making money out of medicines”.

“Some import companies do not honour their commitments in respect of their contractual requirements and scheduling,” the minister said at a September 13th meeting with distributors’ associations.

The health ministry withdrew licenses from at least 200 medicine distributors. Algeria imports nearly 70% of the medicines it needs, at a cost of nearly 2 billion dollars a year.

To grapple with the acute shortage, Algeria signed a partnership agreement on the production of medicines and pharmaceuticals with the United States. A joint committee, which consists of Algerian health officials and scientists as well as American researchers, was inaugurated on October 8th.

A technological study named “Algeria: 2020 Vision” conducted by American laboratories will be ready within three months, Ould Abbes said. The goal is to analyse the regulatory environment in Algeria and make recommendations on the creation of a biotechnological hub in Algeria before the end of the current decade.

The committee will meet once a month to examine all issues related to the establishment of partnership, and will hold meetings every three months. The partnership will help pass on technological skills and meet national needs for medicines in the long run, Algerian Foreign Minister Mourad Medelci said.

As part of the project, a scientific park will be built in Sidi Abdellah, west of Algiers. The technological hub will cover 112 hectares.

Industry Minister Mohamed Ben Mouradi lauded the accord, which will “help enhance political, economic, scientific, technical and cultural exchanges” between the two countries. He also called on the corporations that desire to invest in the field of medicines to take part in the project to increase local production to 70% instead of the current 40%.