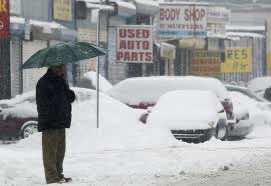 Transportation in the Northeast was hard-hit on Sunday by a rare October snowstorm that also cut power to more than 2 million homes and killed at least three people.

The heaviest snow was recorded in Western Massachusetts, where 27.8 inches/(71 cm) was measured in Plainfield, according to the National Weather Service. Just 45 minutes northwest of New York City, in West Milford, New Jersey, 19 inches/(48 cm) of snow fell.

The storm was expected to push out of Maine on Sunday but not before dumping up to a foot/(30.5 cm) of snow on northern New England states, particularly southern Vermont, the NWS said.

New Jersey Transit and Metro-North Railroad suspended service on several lines into New York City on Saturday and continued the suspension on Sunday.

Many flights at New York City-area airports were canceled. Authorities warned drivers to stay off icy roads. Slippery road conditions were blamed for a crash that killed a motorist in Colchester, Connecticut.

In Temple, Pennsylvania, an 84-year-old man was killed when a snow-caked tree fell through his home, said a Muhlenberg Township Police Department dispatcher.

In Springfield, Massachusetts, a 20-year-old man was electrocuted when he stepped out of his vehicle and touched an electrified guard rail, a Springfield police spokesman said.

Snow fell on Saturday, some at record amounts, across most of Pennsylvania well into Massachusetts after blanketing parts of Virginia, West Virginia and Maryland.

The unseasonably early storm broke a snow record that had stood since 1969 for New York’s Central Park, which received 2.9 inches/(7.3 cm) of snow, the National Weather Service said.

Widespread power outages caused by snow, ice and falling trees were reported from the Mid-Atlantic into New England, leaving some 2 million customers without power.

Another 205,890 customers of National Grid in Massachusetts and New York were without power and 17,467 customers reported by The United Illuminating Company in Connecticut.