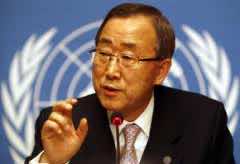 Secretary-General Ban Ki-moon expressed deep concern today at the recent escalation of violence and bloodshed in both southern Israel and the Gaza Strip that has reportedly left around a dozen people dead.In a statement issued by his spokesperson, Mr. Ban condemned rocket fire launched from inside Gaza, which has killed an Israeli civilian in the country”s south, and called for its complete cessation.

“He hopes that the parties will fully respect the calm as brokered by Egypt,” the statement noted, referring to a reported ceasefire organized by Egypt.

Mr. Ban added that the Office of the Special Coordinator for the Middle East Peace Process, headed by Robert Serry, remained actively engaged with the Israelis and Palestinians in supporting efforts to end the violence.

The deadly attacks have taken place just weeks after Israel and the Palestinians agreed to a prisoner exchange that senior United Nations officials said they hoped would lead the two sides to make further hard decisions towards an eventual peace agreement to end the long-running conflict.