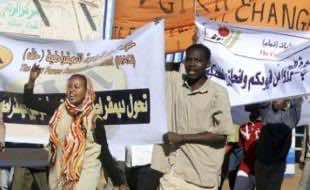 Protests are rare in the African country but anger has been building up over a severe economic crisis with spiraling food prices. Several small anti-government protests took place in the capital Khartoum in the past few weeks.

Hundreds of students took to the streets in the eastern city of Kassala late on Sunday, several witnesses told Reuters.

“They were chanting ‘people are hungry’ and ‘people want the overthrow of the government,” one witness said, declining to be identified.

Kassala lies in an underdeveloped region near the border of Eritrea where anger has been simmering for a long time.

Opposition activists said a protest was held in Kassala two weeks ago when students initially demanded better study conditions. Since then anger has been building up over high inflation and a lack of economic development.

Sudan has been struggling with an economic crisis since its former civil war foe South Sudan took away much of the oil production when it became independent in July.

The lack of oil revenues — the dominant source of state income — has driven up inflation as Sudan imports much of its food needs. The government is trying to diversify the economy but analysts say little has been achieved due to a U.S. trade embargo, corruption and lack of planning.