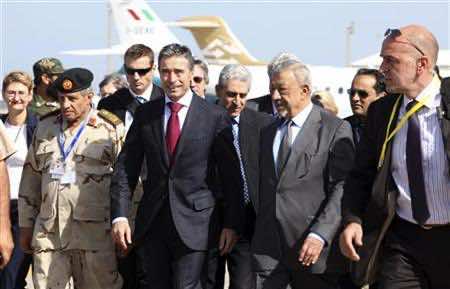 NATO ruled out the possibility of military intervention in Syria on Monday but said Damascus should draw lessons from Libya, where NATO-backed rebels won a civil war that resulted in the killing of long-serving leader Muammar Gaddafi.

Western powers have been tightening sanctions on Syria but have shown no appetite to repeat their Libyan operation in the Middle Eastern nation where protesters have demanded outside protection from a crackdown that has killed 3,000 people.

Speaking during a visit to the Libyan capital Tripoli, NATO Secretary-General Anders Fogh Rasmussen said military action in Syria was out of the question.

“My answer is very short. NATO has no intention (to intervene) whatsoever. I can completely rule that out,” he told reporters.

“Having said that, I strongly condemn the crackdown on the civilian population in Syria. What has happened in Libya sends a clear signal. You cannot neglect the will of the people.

“You should accommodate the legitimate aspirations of your people and work towards democracy.”

Months of protests have failed to dislodge Syrian President Bashar al-Assad, creating an unstable stalemate in a country sitting in the heart of the Middle East.

Assad warned the West over the weekend that meddling in its affairs would cause an “earthquake” in the Middle East where his country borders Israel, Lebanon, Turkey, Iraq and Jordan.

In Libya, NATO military intervention played a decisive role in toppling Gaddafi, the third Arab leader to be overthrown after the revolutions in Tunisia and Egypt. Gaddafi was captured and killed near his home town of Sirte on October 20.