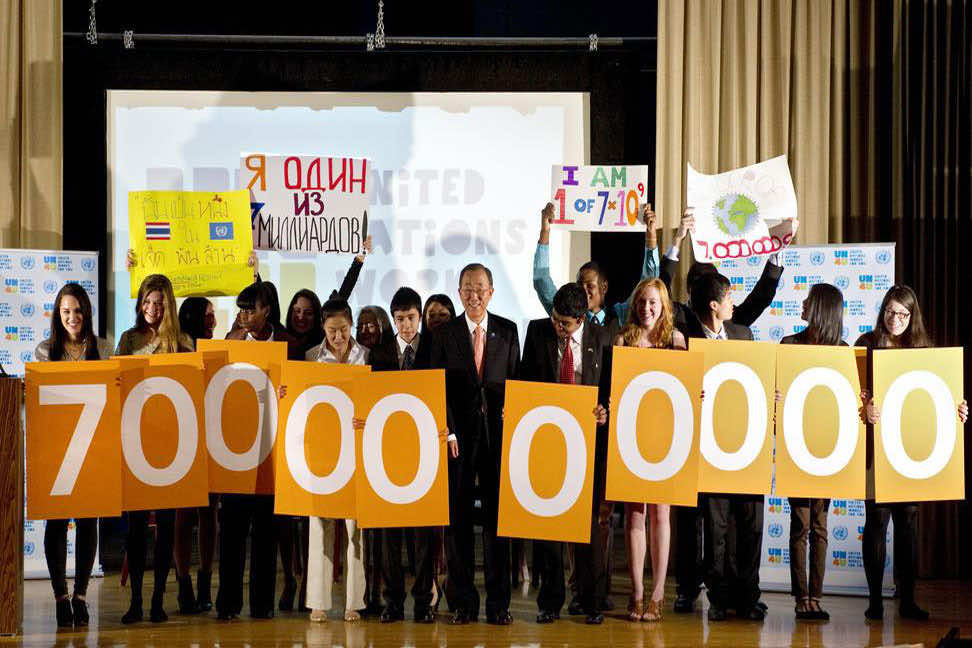 Top United Nations officials today marked the global population reaching 7 billion with a call to action to world leaders to meet the challenges that a growing population poses, from ensuring adequate food and clean water to guaranteeing equal access to security and justice.“Today, we welcome baby 7 billion. In doing so we must recognize our moral and pragmatic obligation to do the right thing for him, or for her,” Secretary-General Ban Ki-moon said at a press event at UN Headquarters to mark the milestone.

Mr. Ban noted that the world’s population reached 6 billion in 1998, only 13 years ago, and it is expected to grow to 9 billion by the middle of this century, or even a few years earlier – by 2043.

“But today – this Day of 7 Billion – is not about one newborn, or even one generation,” he stated. “This is a day about our entire human family.”

The world today is one of “terrible contradictions,” said Mr. Ban, noting that there is plenty of food but 1 billion people go hungry; lavish lifestyles for a few, but poverty for too many others; huge advances in medicine while mothers die everyday in childbirth; and billions spent on weapons to kill people instead of keeping them safe.

In an op-ed published in The International Herald Tribune, Mr. Ban said that as the world population passes 7 billion, “alarm bells are ringing.” He noted that the meeting later this week in France of the Group of 20 leading and emerging economies (G-20) is taking place against the backdrop of growing economic uncertainty and mounting inequality.

“In Cannes, leaders should agree to a concrete action plan that advances the well-being of all nations and people, not just the wealthiest and most powerful,” he stated.

The President of the General Assembly, Nassir Abdulaziz Al-Nasser, said today’s milestone is a reminder of how the world’s poorest – the so-called ‘bottom billion’ – are rendered vulnerable with little or no access to basic needs.

“Seven billion people face, almost on a daily basis – with varying degrees of severity – the consequences of environmental challenges, increasing poverty, inequity, wars and economic instability,” he told the event.

“But with each of these challenges comes an opportunity – 7 billion opportunities in fact,” he added, noting that these opportunities can be harnessed to reach global anti-poverty targets, to invest in youth and women, and to re-think the approach to sustainable development.

The Executive Director of the UN Population Fund (UNFPA) underscored some of the challenges in an expanding global community, including in promoting the rights and health of 7 billion women, men and children.

“We must ensure that, in areas of the world where population is growing fast, we raise the status of women and young girls to be able to access education and make choices for themselves,” Babatunde Osotimehin said at the gathering.

“We also owe it to the 250 million women worldwide who require family planning and are not getting it to make it available,” he said, adding it is also necessary to ensure safe pregnancy and delivery for every woman that wants to give birth.

At the same time, he highlighted the need to give ageing populations in many parts of the world a life of dignity, and to tackle the rapid urbanization and migration which many countries have to face.

The UN human rights chief also marked the occasion, stating that the 7 billionth child is, by virtue of her or his birth, a permanent holder of rights, with an “irrevocable” claim to freedom.

“But she or he will also be born into a world where some people, given the chance, will trample on those rights and freedoms in the name of state security, or economic policy, or group chauvinism,” High Commissioner for Human Rights Navi Pillay said in a statement.

“If she was born a girl, she will have fewer choices. If born in the developing world, she or he will have fewer opportunities. If born a descendant of Africans in a non-African country, or as an indigenous person, member of a religious minority, or as a Roma, she or he is likely to face discrimination and marginalization, with a childhood rife with vulnerability, and a future adult life hedged in by exclusion.

“But he or she has also been born at a time of great hope,” Ms. Pillay added, noting that the demonstrations and mobilizations of civil society seen in 2011 in a sense “provide a birthday celebration for the 7 billionth person on this planet, and also serve as a warning to those who might be inclined to deprive this child, like many others, of his or her birthrights.”