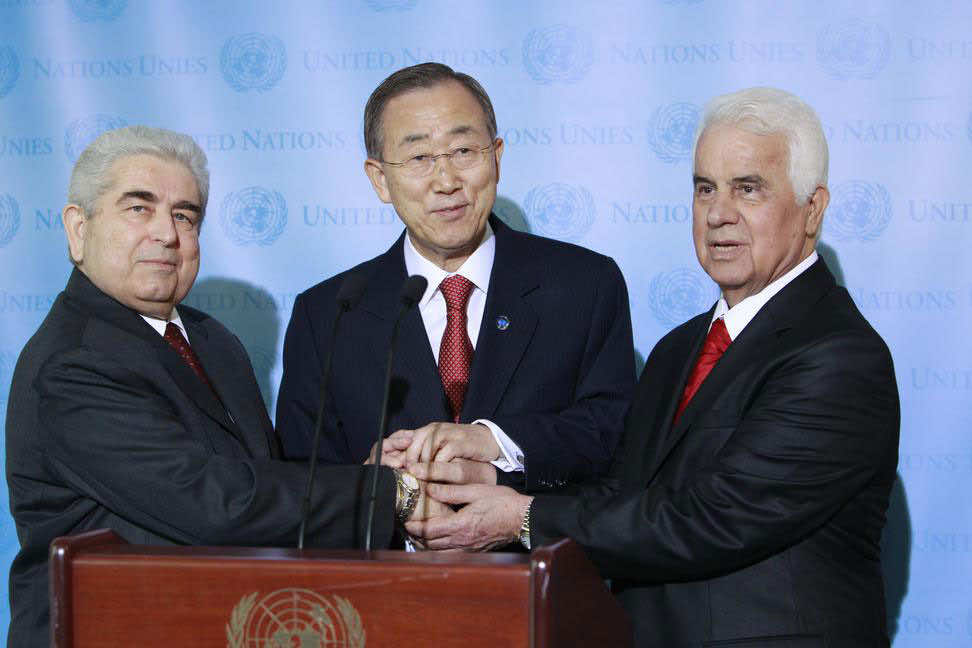 Secretary-General Ban Ki-moon said today he is confident that a comprehensive settlement to the Cyprus issue can be reached, following progress made during two days of talks with the Greek Cypriot and Turkish Cypriot leaders in New York.“The sides have made some encouraging progress during these two days on some of the remaining core issues,” Mr. Ban told reporters at UN Headquarters, flanked by Greek Cypriot leader Dimitris Christofias and his Turkish Cypriot counterpart, Dervis Eroglu.“This has given me confidence that a comprehensive settlement can be achieved. Both leaders have assured me that they believe that they can finalize a deal,” he added.

The leaders met with Mr. Ban outside New York City on 30 and 31 October, the fourth such meeting with the UN chief as part of the ongoing talks aimed at reunifying the Mediterranean island.

At their previous meeting with the Secretary-General in July, it was agreed that the two sides would intensify the talks to reach convergences on outstanding core issues in the negotiations, which include governance and power-sharing, economy, European Union matters, property, territory and security.

Despite the progress made, Mr. Ban acknowledged that “there is still work to be done.” Both leaders have agreed that further efforts are essential over the next two months to move to the “end game of the negotiations,” and he has invited them to meet with him again in a similar format in January next year.

“By then, I expect the internal aspects of the Cyprus problem to have been resolved so that we can move to the multilateral conference shortly thereafter,” said Mr. Ban.

The UN-backed talks began in 2008 with the aim of setting up a federal government with a single international personality in a bi-zonal, bi-communal country, with Turkish Cypriot and Greek Cypriot constituent states of equal status.