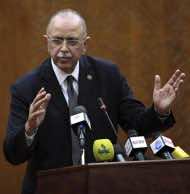 Abdurrahim El-Keib, pitched from academic obscurity to head Libya’s new government, set about selecting his cabinet on Tuesday, hoping to rally the disparate groups which toppled Muammar Gaddafi behind a democratic peace.

After decades as a dissident in exile, working as a professor of electrical engineering, Keib’s family background in Tripoli and his long spells living in both the United States and the Gulf were still being pored over by analysts for clues to his surprise election by the interim ruling council.

Some saw his links to the capital offering a balance to the hold on the National Transitional Council (NTC) by eastern Libyans from Benghazi, the seat of the uprising. Historic regional rivalries are part of a matrix of divisions among the six million Libyans which have been inflamed by months of war.

His lack of past service under Gaddafi, in contrast to NTC chairman Mustafa Abdel Jalil and others, and his presence in Libya during most of this year’s fighting, in contrast to the outgoing wartime prime minister Mahmoud Jibril, may also boost his legitimacy as the government tries to organize elections.

Keib was elected with 26 votes from the 51-member NTC on Monday in Tripoli, taking over from Jibril, who had promised to resign once the killing of Gaddafi and fall of final bastions of support allowed last week’s declaration of “liberation.”

Under a timetable for democracy drawn up by the NTC, an unelected gathering of Gaddafi opponents which won international recognition as Libya’s legitimate government, Keib has another two weeks to form his transitional government.

The administration should organize an election in the first half of next year to an assembly that will draft a constitution.

With vast oil and gas reserves and a relatively small population, Libya has the potential to become a prosperous nation, but regional rivalries pent up during Gaddafi’s 42 years of one-man rule could descend into a cycle of revenge.

Keib will have to rein in the armed militias that sprang up in towns across the sprawling, thinly populated country to overthrow Gaddafi and reconcile those remaining loyal to the old rule while brokering a new system to govern the country.

“This transition period has its own challenges. One thing we will be doing is working very closely with the NTC and listening to the Libyan people,” Keib said on Monday.

An academic and a businessman, Keib has spent much of his life outside Libya, studying in the United States before taking up academic posts there and in the United Arab Emirates.

While Western powers’ military backing, which formally ended at midnight on Monday, was vital to rebels’ overthrow of Gaddafi in August, Qatar and the UAE provided important Arab diplomatic and military elements. Some analysts believe Libya could now see those foreign allies competing for influence.

NTC members, as well as former students from his days teaching at Tripoli University in the 1970s, described Keib as “quiet and friendly” and said he had helped with the financing of the revolt against Gaddafi.

The prime minister said he expected to choose his cabinet ministers within the two weeks set by the NTC timetable.

Keib did not set out any specific plans for the coming months, but said that worries over foreign oil contracts were unfounded. “We understand that we had 42 years with a brutal dictator … concerns are in order. But there should be none of them,” he said. “We demand respect for our national rights.”

Interim Oil Minister Ali Tarhouni, also a dissident academic returned from the United States, had been among the favorites named by observers to become prime minister. But he received only three votes, highlighting the unpredictable nature of the emerging politics in the North African state.

Many analysts have pointed to divisions within the NTC, but Keib said any fears were unfounded: “Within the NTC, what you see is democracy in practice. This is new for us in Libya.”

With academic credentials in electrical power engineering and author of numerous research papers, Keib’s resume is impressive but noticeably scant on political background.

“I’m not sure if he came back to Libya. Once you get involved with the opposition, it is difficult to get back,” he told Reuters. “He was against the regime.”

A biography on the website of The Petroleum Institute in Abu Dhabi, where Keib is listed as chairman of the electrical engineering department, gives his graduation with a first degree from the University of Tripoli in 1973, followed by a masters from the University of Southern California in 1976 and a doctorate from North Caroline State University in 1984.

Much of his U.S. career since then was spent at the University of Alabama, where he was made a professor in 1996.

Atrash said Keib’s accession to power may have more to do with the dynamics of Libya than the man himself.

“I think he was elected because he is from Tripoli,” he said. Atrash said the NTC, which has been accused of political bias in favor of Benghazi, wanted to “balance things” and show Tripolitans that the NTC is inclusive.

Others speculate that Keib, who is relatively low key, was voted in to fill the post while the main political players wait for the national elections, when the interim prime minister chosen by the unelected NTC will have to resign.