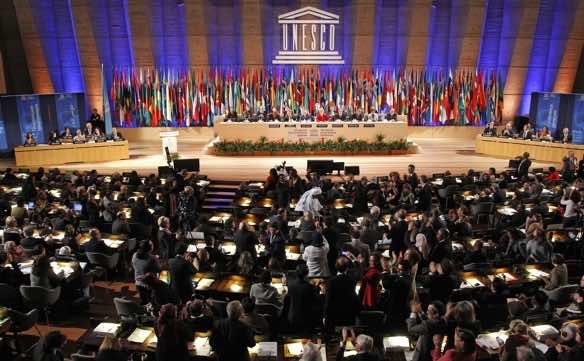 The US government has cut off tens of millions of dollars in annual funding to the UN Educational, Scientific and Cultural Organisation (UNESCO) after it voted to admit Palestine as a full member.

Victoria Nuland, the US state department spokeswoman, said payments to the Paris-based organisation would be stopped immediately. She said Washington would refrain from making a $60m payment it planned to deliver in November.

“Today’s vote by the member states of UNESCO to admit Palestine as a member is regrettable, premature, and undermines our shared goal of a comprehensive, just and lasting peace in the Middle East,” Nuland said.

The Palestinian bid received 107 “yes” votes during a UNESCO meeting in the French capital, with 14 countries voting against and 52 abstaining, enough to satisfy a two-thirds majority of those countries present and voting.

The decision grants full membership to Palestine, which has had observer status since 1974; it allows the Palestinians to register certain sites, like the Church of the Nativity, in UNESCO’s World Heritage register. Riad al-Malki, the Palestinian foreign minister, said the vote would help to “preserve cultural heritage in Palestine.”

UNESCO membership marks a small victory for the Palestine Liberation Organisation (PLO), which filed a bid last month for full membership at the UN.

UNESCO, like many UN agencies, is a part of the world body but has separate membership procedures and can make its own decisions about which countries belong.

The disconnect between memberships is rare but not unprecedented. Two tiny Pacific island nations – the Cook Islands and Niue – are members of UNESCO but not the UN, while Liechtenstein belongs to the larger world body but not the cultural agency.

The PLO’s bid for full membership has been stalled for weeks at the UN Security Council, and will likely face a US veto when it comes to a vote.

The “yes” vote at UNESCO will add at least symbolic weight to the PLO’s argument that the UN should recognise a Palestinian state.

Nimrod Barkan, the Israeli representative to UNESCO, called the vote “tragic for the idea of UNESCO”.

Israel voted against the measure, as did the US, Canada and several European countries, including Germany. The UK abstained, while France voted in favour.

Ahmed Yousef, a Hamas official and the deputy foreign minister in Gaza, called it a “great achievement” and said the vote “shows that Israel and America are not dictating politics to the world anymore”.

Mouin Rabbani, an analyst at the Institute for Palestinian Studies in Amman, said the vote would make it harder for those countries to successfully oppose Palestinian efforts for recognition.

“What they’re doing is developing leverage over the Americans, the Europeans, the Israelis, so these parties begin to take them more seriously,” Rabbani said.

Nuland said the vote triggered a long-standing congressional restriction on funding to UN bodies that recognise Palestine as a state before an Israeli-Palestinian peace deal is reached.

“The United States remains steadfast in its support for the establishment of an independent and sovereign Palestinian state, but such a state can only be realised through direct negotiations between the Israelis and the Palestinians,” she said.

Nuland said the PLO’s push for UN recognition had hindered talks between Israel and the PLO. But pressed by reporters in Washington, she could not say how the UNESCO vote hurt negotiations. Talks between the two sides have been stalled for more than a year.

The US would maintain its membership and participation in the body, Nuland said, though it was not immediately clear how that would work if it was no longer paying its share of the costs.

UNESCO depends heavily on US funding, with Washington providing 22 per cent of its budget, but has survived without it in the past.

The European Union tried to stop the PLO bid by offering them limited membership on UNESCO’s executive committee, and funds to renovate the Church of the Nativity in Bethlehem, believed to be the birthplace of Jesus.

The PLO rejected that offer, with one official telling the Israeli newspaper Haaretz that “the EU [was] trying to tempt us with money to sell our principles”.