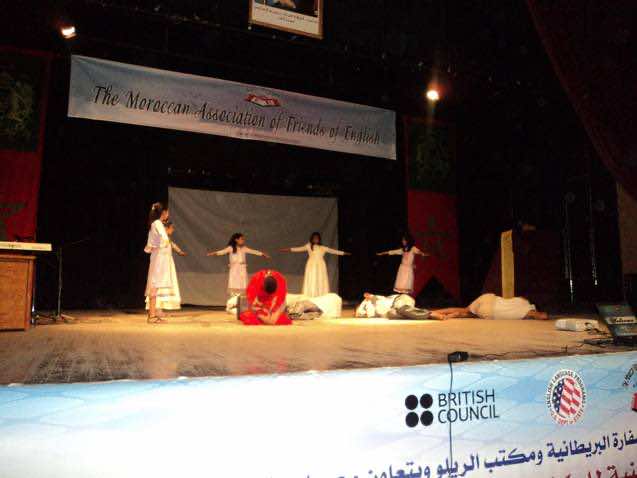 The Creative Writing Award Ceremony was an opportunity for the Moroccan Association of Friends of English (MAFE) to prove that its celebration of creativity is not limited to creative writing. The association celebrated silence in one if its best creative forms. That was the case during that ceremony, which was organized last Sunday in Fez, and where participants were treated to a rich event about creativity not only in writing, but also in singing and performing as well.

The event was cultural and we had the chance to taste creativity in different flavors. We had the chance to listen to some of the talented students’ music and songs mixed with Moroccan folklore, as well as other original songs with original melodies.

Among the varied talents introduced during the ceremony, there is a group of young performers who taught everybody a lesson about the real and true meaning of citizenship. I am not going to hide my appreciation of their performance, its high caliber, and its overwhelming simplicity, despite the young age of the performers. Indeed, the whole ceremony was a success and it promised a successful and brilliant future for the association. I think we need to stop at this silent performance and give it credit.

The silent play started by the performers representing people from different walks of life coming on stage one after the other. After a brief show of their respective roles in society, they fell asleep on stage as a sign of their laziness and lack of dedication to their homeland.  When everybody fell asleep, a young performer representing Morocco entered the stage and was shocked at the sight of the dormant citizens and collapses.

A group of little girls dressed as butterflies entered the stage and sent a breeze on the dormant citizens to wake them up. After this, the scene changed completely as everybody stood to their feet and got back to work; the farmer went back to cultivating his land, the teacher to his students, and the doctor to his patients. Consequently, Morocco stood back on its feet and was carried on its people’s shoulders.

This simple performance was carried out without saying one single word. What was really captivating is the age of the performers and the message they conveyed to the audience. As a matter of fact, the play addressed a delicate and thorny issue that, unfortunately, we had been blind to.

It emphasized the fact that dedication to one’s job transcends immediate material gains to achieve the welfare and glory of the nation, contrary to what we Moroccans tend to believe. Few of us are aware of the importance of their roles in the welfare and prosperity of our country and our understanding and perception of the meaning of citizenship. We tend to forget that it is our role to serve our country not the other way around.

The award ceremony was an opportunity for this young group to make a useful statement. MAFE was instrumental in celebrating creativity not only in writing, but also in silence. Thanks to its event, such a marvelous piece was made public.

Among the things I appreciate in MAFE is its commitment to its Moroccan identity and its involvement in cultural dialogue through openness to the Other. At the same time, its members endeavor to show their pride in being Moroccan.

To be honest, after the ceremony/show was over, I realized that the whole event was worth coming to from Rabat and going back again the same day. The event lived up to my expectations, and I enjoyed every bit of it. Consequently, I congratulate the members of the board for the success of the event and wish them all the best in their future endeavors and the best to MAFE.