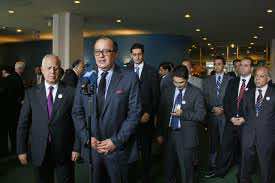 Patiently, Morocco has refocused its diplomacy since the accession to the throne of His Majesty King Mohammed VI. From developing South-South cooperation, to supporting international peace efforts and pursuing a diplomacy in which values are not sacrificed to narrow interests, Morocco has managed to forge a new image and gain a place in the alliance of nations.

The accession of Morocco to the Security Council as a non-permanent member from the Africa Group constitutes a watershed event. Morocco is not a member of the African Union for reasons we know, yet it was elected to represent Africa.

This is an important victory that we owe to the diplomatic orientations of the Sovereign,

as well as his different achievements.

At the same time, the election of Abdelouahed Radi at the head of the International Parliamentary Union is also international recognition of the new status of Morocco.

This new standing opens up opportunities and imposes responsibilities on us.

It goes without saying that these positions allow Morocco to better explain the Sahara issue and raise support for the autonomy plan under Moroccan sovereignty as a solution for the long-lasting conflict. This is a modest goal.

During the Libyan crisis Morocco has shown great skill and a growing influence in various regional groupings. As a partner with Europe, Gulf countries,  Africa and the United States, Morocco has an important role to play.

The new standing of Moroccan diplomacy requires us to take on a stronger role in the peace process in the Middle East. As Egypt is no longer able to play a central role, Morocco ought to help the Palestinian people within the international community to achieve their rights.

Morocco should also impact international decisions in terms of ecology, sustainable development, financial regulation and migration. Our new position imposes duties and enables new ambitions. Our diplomatic apparatus has to live up to the challenge.

Translated from French by Samir Bennis.