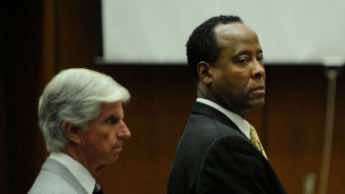 Michael Jackson’s doctor Conrad Murray (pictured right) declined to take the witness stand in the trial in which he is charged in the pop star’s 2009 death. Defense and prosecution have rested their cases and closing arguments are set for Thursday.

Michael Jackson’s doctor on Tuesday declined to testify as both the prosecution and defense rested their cases in the trial in which he is charged in the 2009 death of the pop star.

Asked by the judge whether he wanted to take the witness stand in his involuntary manslaughter trial, Dr. Conrad Murray replied: “My decision is that I will not testify in this matter, judge.”

Murrayhad said on Monday he was still undecided about testifying.

His decision means that the only time the jury will have heard fromMurraywas in a two-hour tape of a police interview he gave two days afterJackson’s death in June 2009.

Defense and prosecution lawyers later rested their cases after more than five weeks of evidence and 49 witnesses. The judge set closing arguments for Thursday.

Los Angeles Superior Court Judge Michael Pastor decided on a set of jury instructions to guide the panel of seven men and five women during their deliberations and one guideline could damage the defense.

Murray admits giving Jackson a small dose of the powerful anesthetic propofol as a sleep aid at the singer’s Los Angeles mansion. But his attorneys have sought to convince the jury that the singer somehow gave himself an extra dose of the drug, without Murray’s knowledge, and thus caused his own death.

The judge said he would instruct jurors that Murray still would be responsible for Jackson’s death if it was foreseeable that the singer could have injected himself with propofol — an action that was called an “intervening cause” in court.

“The defendant would remain criminally liable even if the jury was to believe that scenario,” Deputy District Attorney David Walgren told the court about a self-injection.

Murray denies involuntary manslaughter, or gross negligence, but could face up to four years in prison if convicted.

He was caring for Jackson when the 50-year-old pop star was found not breathing just a few weeks before a planned series of London come back concerts. He was ruled to have died from an overdose of propofol, combined with sedatives.

Jurors have heard from more than half a dozen doctors, including one called by the defense, who said propofol is normally used to sedate patients for surgery and should not be given in a home setting where there is a lack of back-up personnel and medical equipment.