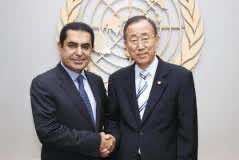 Secretary-General Ban Ki-moon arrived in the Libyan capital today on an unannounced visit together with the President of the General Assembly, Nassir Abdulaziz Al-Nasser, some 10 days after the transitional authorities declared the full liberation of the North African nation.During their brief visit to Tripoli they are meeting with members of the National Transitional Council (NTC) and civil society, according to Mr. Ban’s spokesperson.

The United Nations renewed its commitment to help the people of Libya build a brighter future as the NTC declared full liberation on 23 October, more than eight months after the popular uprising began and days after the death of long-time leader Muammar Al-Qadhafi.

The pro-democracy uprising in Libya was part of a wider popular movement across North Africa and the Middle East this year that has also led to the downfall of regimes in Tunisia and Egypt.

The UN has a mission on the ground to support the Libyan people and their authorities as they work to rebuild. It is headed by the Secretary-General’s Special Representative for Libya, Ian Martin.

Following the visit to Libya, the Secretary-General is slated to arrive in Cannes, France, this evening ahead of the meeting of the world’s Group of 20 largest economies (G-20).