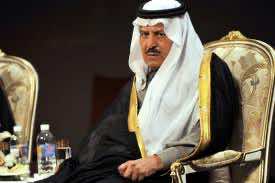 Crown Prince Nayef bin Abdul Aziz, the new heir to Saudi Arabia’s King Abdullah, warned on Tuesday the kingdom would use “all means” to ensure a peaceful hajj, or pilgrimage, amid tumult in other Arab countries and rising tensions with Iran.

Millions of Muslims have begun to arrive in the holy city of Mecca to perform the hajj, one of Islam’s five pillars and a duty for all Muslims who are physically able.

“We are ready to face all events, whatever they are … our means are peaceful … except for those who want to attack, whom we will prevent with all means.”

Prince Nayef made the statements during news conference in Mecca. He is also Saudi Arabia’s interior minister.

“We will use peaceful means in case of trouble,” he said in statements carried by the official SPA news agency.

Home to Islam’s holiest sites, Saudi Arabia regards itself as the guardian of Islam and assumes the responsibility of maintaining a peaceful hajj when Muslims from many countries and sects gather at the same place and time.

The news conference followed a military parade featuring riot police, special forces and tanks that the kingdom can call upon if deemed necessary.
Prince Nayef, who is also chairman of the Hajj Supreme Committee, considered the service of pilgrims and visitors to the two holy mosques and sacred places in Saudi Arabia a great honor to the Kingdom’s leadership and people, the official SPA reported.

When asked by Al Arabiya about whether the Kingdom has reached any understanding with Iran concerning the annual hajj pilgrimage following allegations of Iranian involvement in a plot to murder the Saudi ambassador in Washington, Prince Nayef said there wasn’t any special “understanding” with Iran over that issue.

“There is no understanding because there is no need for it. The Iranians have always shown their respect for the hajj,” Crown Prince Nayef said.

Strained ties between Iran and Saudi Arabia grew worse last month when the United States accused Iranian officials of having a hand in a thwarted plot to kill the ambassador on American soil.

Iran has strongly denied involvement and emphasized “good relations” with its Arab neighbor across the Gulf.

More than 1.5 million Muslims have arrived in Saudi Arabia for the hajj, state media reported on Monday.?? Hajj rituals will begin on Friday and the pilgrimage will peak on Saturday.

In an interview with Al Arabiya on Monday, Dr Abdul Aziz al-Khudeiri, head of the Haj Executive and Preparatory Committee, said that through Monday 1.6 million pilgrims had arrived in the kingdom.