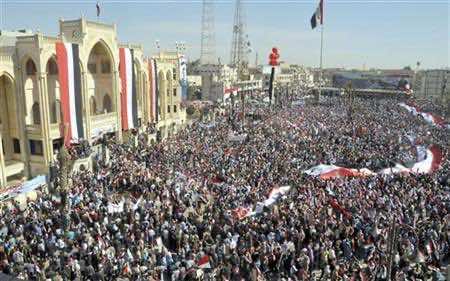 State media reports that Syria and the Arab League have agreed on a roadmap to end violence in the country, with a formal announcement expected Wed. The League has been pressuring President Assad to end the crackdown on dissenters, with no response.

Syria and the Arab League have agreed on a roadmap to end the violence, and a formal announcement will be made on Wednesday at Arab League headquarters in Cairo, Syrian official media said.

The Arab League was expecting Syria to respond Tuesday to proposals to end more than seven months of bloodletting which, the UN says, has claimed more than 3,000 lives, mostly civilians killed in a government crackdown on dissent.

Arab foreign ministers are due to hold a key meeting in Cairo to discuss the violence, after talks Sunday in Doha with their Syrian counterpart Walid Muallem at which they offered a plan to end the crisis.

“Syria and the Arab League are in agreement over the final paper concerning the situation in Syria and the official announcement will be made at Arab League headquarters tomorrow,” Syrian state television and SANA news agency said.

President Bashar al-Assad is under mounting international and Arab pressure to end the violence and implement wide-ranging political reforms to meet the aspirations of protesters who have rallied almost daily since mid-March.

The Arab League proposals call on Assad to pull tanks off the streets and launch a national dialogue with his opponents.

Syria had been due to give its response to the plan on Monday but Muallem asked for some changes.

An Arab League diplomat told AFP in Cairo “there has been agreement on some minor amendments, but the Arab delegation demanded a final response on Tuesday to the Arab proposal.”

He said Syria would inform Qatar — whose foreign minister chaired the Doha talks — of its response.

Syria’s Arab League representative Yusef Ahmed told AFP in Cairo that Damascus would respond Tuesday to the plan. “We are dealing positively with the last proposal, which was drafted (at Sunday’s meeting) in Qatar.”

“We had a good meeting in Doha and we have found some common group with our Syrian friends. I hope this will be confirmed in Cairo,” he said on Tuesday.

The pro-regime Syrian daily Al-Watan said “Muallem provided the Qatari side with ideas adequate to resolve the crisis in Syria… and requested additional time to consult (Tuesday) with his leadership.”

Some diplomats in Cairo expressed concerned that the response from Damascus will be tied to conditions to gain time.

“Syria’s answer could be ‘yes, but,’ a manoeuvre to buy time,” said one diplomat who attended the Doha talks.

Meanwhile, Syrian activists reported that five more people were killed in the protests-wracked country and dozens arrested, including 60 schoolchildren detained for holding an anti-regime rally in their school yard.

Two civilians were killed when pro-regime militiamen opened fire in central Homs and one was shot by security forces in the northwestern province of Idlib, the Syrian Observatory for Human Rights said.

An officer and a soldier were also killed in Idlib by gunmen believed to be army deserters, the watchdog said, adding that an 18-year-old man also died on Tuesday of gunshot wounds from the previous day near Damascus.

Syrian security forces also rounded up dozens of civilians in Daraa — cradle of the anti-regime protests that erupted March 15, the watchdog said.

Pro- and anti-regime demonstrations also gripped Deir Ezzor on Tuesday, with state television reporting that thousands rallied in support of Assad while activists spoke of a counter-rally in the eastern city.

“If it depends on us, I don’t think we will allow anything of that sort to be repeated” in Syria, Lavrov said in Abu Dhabi.

“We do not think that there is any party which is willing to internationalise this matter. At least we Arabs don’t,” he said.

China, along with Russia, vetoed a Western-drafted resolution at the UN Security Council on October 4 that would have threatened Assad’s regime with targeted sanctions if it continued its campaign against protesters.

And the US-based Committee to Protect Journalists (CPJ) has said it fears for several journalists and bloggers in Syria who have vanished, with no response from authorities as to their fate.