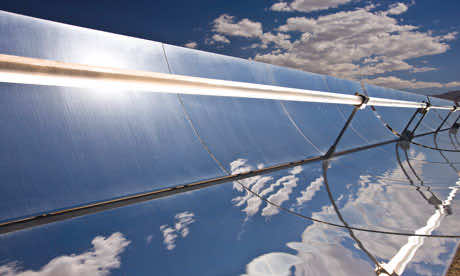 The vast solar and windfarm project across North Africa and the Middle East may provide 15% of Europe’s electricity by 2050.

Morocco has been chosen as the first location for a German-led, €400bn project to build a vast network of solar and windfarms across North Africa and the Middle East to provide 15% of Europe’s electricity supply by 2050.

The Desertec Industrial Initiative (DII), a coalition of companies including E.ON, Siemens, Munich Re and Deutsche Bank, announced at its annual conference being held in Cairo on Wednesday that “all systems are go in Morocco”, with construction of the first phase of a 500MW solar farm scheduled to start next year. The precise location of the €2bn plant is yet to be finalised, but it is expected to be built near the desert city of Ouarzazate. It will use parabolic mirrors to generate heat for conventional steam turbines, as opposed to the photovoltaic cells used in the UK.

The 12 square kilometre Moroccan solar farm will, said Paul van Son, Dii’s chief executive, be a “reference project” to prove to investors and policy makers in both Europe and the Middle East/North Africa (MENA) region that the Desertec vision is not a dream-like mirage, but one that can be a major source of renewable electricity in the decades ahead.

Van Son described Desertec as a “win-win” for both Europe and MENA, adding that the Arab spring had created both opportunities and “questions” for the ambitious project. Discussions are already underway with the Tunisian government about building a solar farm, he said, and Algeria is the next “obvious” country, due to its close proximity to western Europe’s grid. Countries such as Libya, Egypt, Turkey, Syria and Saudi Arabia are predicted to start joining the network from 2020, as a network of high voltage direct current cables are built and extended across the wider region.

German companies and policymakers have dominated the Dii conference, reflecting the nation’s recent decision to totally phase out nuclear power by 2022 in reaction, in part, to the Fukushima nuclear disaster in Japan in March. By comparison, not a single representative from the UK was at the conference.

Jochen Homann, the state secretary at Germany’s Federal Ministry for Economics and Technology, told the conference: “We undertook major reforms in German energy policy this summer and Desertec opens up an opportunity for us. We want to enter the age of renewables with sustainable sources of electricity supplying 80% of our power generation by 2050. As we accelerate our phase-out of nuclear power, we need to safeguard an affordable supply of electricity and we will be interested in importing renewables supplies in the future. Germany’s government will continue to support Desertec. It is an inspiring vision which is good for foreign, climate and economic policies.”

But Homann stressed there would be “pre-conditions” for guaranteeing long-term support from the Germany government. He said there must be “liberalisation” of the energy markets across the MENA region: “North Africa still provides huge subsidies for fossil fuels. There will need to be regulatory improvements. Only then will renewables be able to compete and a common market created. And other European states must participate, too.”

Hassan Younes, Egypt’s minister of electricity and energy, told the conference that Egypt was keen to participate and that it hoped to have a 1,000MW windfarm built by 2016 in the Gulf of Suez, adding to the 150MW “hybrid” gas-solar power plant that opened 100km south of Cairo earlier this year.

The conference was told via a Dii promotional video that the network of solar and windfarms across the MENA region would help to “halt migration” into Europe, by fast-tracking the rise of the region’s youthful population out of poverty and unemployment.