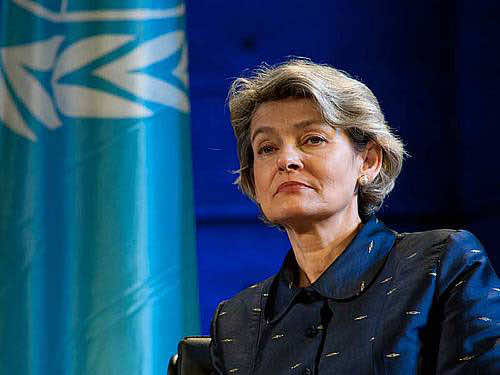 The head of the United Nations Educational, Scientific and Cultural Organization (UNESCO) today voiced regret over the decision by the United States to withhold its dues to the agency, saying that reduced funding will affect its ability to implement crucial programmes in education, support for emerging democracies and the fight against extremism.

“UNESCO is encouraged that the United States will maintain its membership in the organization and hopes that a resolution to the funding issue will ultimately be identified,” said Irina Bokova, the Director-General of UNESCO, in a statement. “Until that happens, it will be impossible for us to maintain our current level of activity.”

“I call on the US administration, Congress and the American people to find a way forward and continue support for UNESCO in these turbulent times,” she said.

UNESCO’s General Conference on Monday voted to admit Palestine as a full member of the Paris-based agency. The decision was supported by 107 member States, with 14 against and 52 abstentions. The United States had opposed the move.

Ms. Bokova said she believed that at a time of economic crisis and social transformation, UNESCO’s work was vital to promote global stability and democratic values, which she said were core interests of the US.

“The United States is a critical partner in UNESCO’s work. The withholding of US dues and other financial contributions – required by US law – will weaken UNESCO’s effectiveness and undermine its ability to build free and open societies,” she said.

US funding has enabled UNESCO to develop and sustain free and competitive media in Iraq, Tunisia and Egypt. In Afghanistan, US support has helped UNESCO to teach thousands of police officers to read and write.

UNESCO literacy programmes in other conflict-affected countries give people the critical skills and confidence they need to fight violent extremism, Ms. Bokova pointed out, adding that the agency is training journalists to cover elections objectively in a bid to sustain the democratic spirit of the so-called “Arab Spring.”

“Across the world, we stand up for each journalist who is attacked or killed, because we are the UN agency with the mandate to protect freedom of expression. In Washington, earlier this year, I awarded the UNESCO Press Freedom Award to an imprisoned Iranian journalist, Ahmad Zeidabadi,” she said.

UNESCO is also the only UN agency with the mandate to promote Holocaust Education worldwide, and has, with funding provided by the US and Israel, been developing curricula to ensure that the Holocaust is never forgotten.

US support has also enabled UNESCO to put science at the service of people, Ms. Bokova said, citing as an example a global effort to expand ocean-based tsunami warning systems.