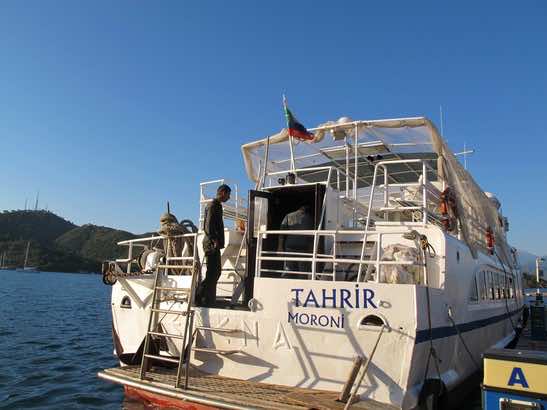 Two boats carrying pro-Palestinian activists have reached international waters of the eastern Mediterranean and are making their way towards the Gaza Strip, in the latest attempt to break the Israeli blockade against the territory.

The Tahrir, or Canadian Boat to Gaza, and the MV Saoirse, the Irish boat to Gaza, left the port of Fethiye in southwest Turkey on Wednesday after Turkish authorities gave them permission to sail to the Greek island of Rhodes.

The Turkish coast guard briefly escorted the ships before the Tahrir and Saoirse took a turn towards Gaza.

Sailing under the flag of the Comoros Islands, the Tahrir is carrying six activists, a captain and five journalists.

The Saoirse – sailing under the US flag – has 12 Irish nationals on board, none of whom are journalists.

David Heap, a member of the steering committee on board the Tahrir, told Al Jazeera that the activists chose to leave from Fethiye because of the strained relations between Turkey and Israel.

“The Turkish government has been creating more distance from Israel diplomatically and we know there is support from Turkish society for what we are doing.

“Our judgment was that the Turkish state would not interfere with us if we didn’t make too much of a public issue of our plan to depart from there,” Heap told Al Jazeera.

It will take at least a couple of days before the boats reach the Palestinian waters of the Gaza Strip, where they expect to be approached by the Israeli navy.

“We have some distance to cover between where we are now and Palestinian territorial waters of Gaza.

“Obviously we are going to avoid going through Israeli territorial waters.

“Our plan is to go directly from international waters into the territorial waters of Gaza – within a couple of days.

“We’re not, at this point, going to state exactly when. We will choose our moment to what is favourable to what we are trying to do,” Heap said.

The activists say the new attempt the break the siege on the Gaza Strip is part of a campaign they call “freedom waves”, implying that more such efforts will follow.

Both ships were part of previous attempts to break the siege on the Gaza Strip that was stalled when the Greek government refused to let a flotilla leave from its shores in July this year.

The Tahrir, the larger ship of the two, was intercepted by the Greek coast guard with more than 30 pro-Palestinian activists onboard.

Two of them were detained for defying Greece’s ban on setting sail to Gaza. The vessel was stopped about 10 minutes after it left port on the island of Crete.

The Irish boat allegedly suffered damage when it was sabotaged while waiting to join the flotilla from Turkish waters. The ship has since been repaired and kept in dry-dock in Turkey.