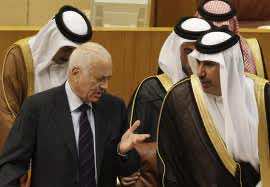 The Syrian government has announced today that it fully accepted the initiative to end the bloodshed, which was proposed by the Arab League and delivered last week to Damascus by a ministerial delegation headed by the prime minister of Qatar.

The decision of the Syrian government was announced by official news outlets before being officially declared by Syria’s envoy to the Arab League on Wednesday at an Arab League Ministerial Meeting in Cairo. “The Syrian delegation accepted the Arab League plan without reservations and in its entirety”, an official of the League said was quoted by the AFP as saying.

“We are happy to have reached this agreement and we will be even happier when it is implemented immediately,” Qatari Prime Minister Sheikh Hamad bin Jassim al-Thani told a news conference after the ministerial meeting held in Cairo.`

The peace plan agreed to by Syria provides for a complete halt to the violence to protect civilians, and calls for the release of people detained as a result of the recent events, the withdrawal of forces from towns and districts where there have been armed clashes, and the granting of access to the Arab League, and Arab and international media.

The Syrian minister of foreign affairs, Waleed Moalem, who visited Doha last Sunday to meet with the LAS committee rejected one of the original provisions of the initiative, which would have required the dialogue between the government and the opposition to take place outside of Syria. He also rejected a provision about the mechanism for monitoring the implementation of the plan.

The plan stipulates that the Arab ministerial committee will conduct consultations with the government and the various Syrian opposition parties aimed at launching a national dialogue. But the Syrian National Council announced yesterday on its website that it had not been contacted about the initiative and that it only follows the details as provided by the media.

The Council affirmed the historical responsibility incumbent on the Arab League to stop the bloodshed and massacres perpetrated by the regime against the people of Syria, and the need to take all necessary measures, political, diplomatic, legal and economic, to save the Syrian people from death and destruction.