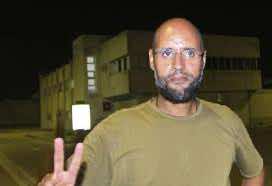 While Seif is worried that he could be handed over to Libya’s new government, Moreno-Ocampo highlighted fears that mercenaries were trying to help Kadhafi’s heir-apparent to escape.

He said however it was possible Libya’s new government could be given jurisdiction in the case against Seif and Abdullah al-Senussi, the late dictator’s brother-in-law and intelligence chief.

The ICC issued warrants on June 27 against Kadhafi, Seif and Senussi on June 27 accusing them of crimes against humanity during the crackdown against Libyan protests.

Charges against Kadhafi could be formally dropped when the court gets official proof of the strongman’s killing on October 20. Seif and Senussi have not been seen since and Moreno-Ocampo said his office was “galvanizing efforts” to bring them to justice.

Seif’s representatives have asked questions such as what would happen to him if he appeared before judges and the various conviction and acquital possibilities, the prosecutor told the 15-member Security Council which referred the Libya case to the ICC.

The court had “clarified” that under its founding Rome statute “he may request the judges not to order his return to Libya after his conviction or acquital.”

“Judges can also decide if he may be extradited to another state,” the prosecutor said.

Libyan authorities have told the ICC that they are preparing their own national judicial process. Moreno-Ocampo said it would be for ICC judges to rule on any “challenge” for jurisdiction over Seif made by the new government.

“We are also receiving information that a group of mercenaries may be endeavoring to facilitate his escape from Libya. We are calling upon states to do all that they can to disrupt any such operation.”

The prosecutor also challenged the council to do more to bring the wanted Libya regime figures to justice.

Moreno-Ocampo said it was up to Seif and Senussi “to decide if they will surrender themselves, remain in hiding or try to escape to another country. It is up to the UN Security Council to ensure that they face justice for the crimes for which they are charged.”

The ICC, with the UN sanctions committee on Libya and the international police agency, Interpol, were hunting for Seif’s assets, which could be used to compensate his victims, the prosecutor said.

ICC investigators went to Libya last week to collect more evidence in the case against Seif and also into allegations of mass rapes by Kadhafi forces during the crackdown against protesters.

Hundreds of rapes are suspected to have been carried out, Moreno-Ocampo said.

Investigators have “interviewed a limited number of victims, who were kidnapped and raped in unknown secret detention centers,” he added.

Witnesses have indicated that Kadhafi and Senussi and other top officials “were discussing the use of rape to persecute those considered dissidents or rebels.”

Allegations of crimes have also been made against the NATO forces that conducted airstrikes on Kadhafi targets and by National Transitional Council forces “including the alleged detention of civilians suspected to be mercenaries and the alleged killing of detained combatants,” the prosecutor said.

“These allegations will be examined impartially and independently by the office,” he vowed.