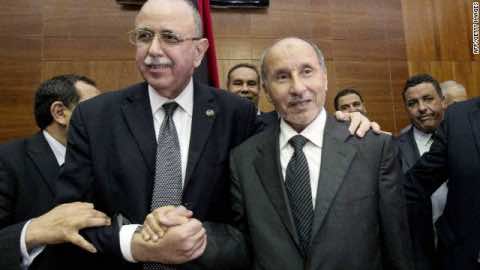 Abdurrahim El-Keib, picked by Libya’s interim council to head a government tasked with managing a difficult transition from civil war to democracy, is a Tripoli-born academic who has spent decades abroad and has had scant political experience.

Until now he has had a low profile — when he emerged with 26 out of 51 votes cast by the National Transitional Council (NTC) late on Monday, bemused whispers filled the room.

Interim Oil Minister Ali Tarhouni, who had been the front-runner for the post, received only three votes.

In a hastily called news conference after the vote, Keib paid tribute to the sacrifices Libyans had made to rid their country of Muammar Gaddafi’s cruelly quixotic 42-year rule.

“We salute and remember the revolutionaries who we will never forget. We will not forget their families,” the softly spoken electrical engineering professor said in English.

“We guarantee that we are building a nation that respects human rights, but we need time. We beg you to give us the time to think through all the issues that have been raised,” apparently referring to charges by human rights groups that NTC fighters have carried out revenge killings and other abuses.

Keib pledged to form a government within two weeks, but offered few clues about how it will tackle the vast challenges facing Libya, still reeling from eight months of civil war.

Apart from preparing for elections, Keib’s government will have to disband or integrate into a new army the disparate anti-Gaddafi fighters who are now a law unto themselves.

It must build many institutions from scratch, revive the oil- and gas-based economy, and start healing the physical and psychological scars of war in a land split by tribe and region.

Ahmed al-Atrash, a Libyan political scientist, said Keib had left Libya in 1976 and joined the opposition to Gaddafi.

“I’m not sure if he came back to Libya. Once you get involved with the opposition, it is difficult to get back,” he told Reuters. “He was against the regime.”

Atrash said the NTC may have picked Keib, a scion of a nationalist family from Tripoli’s old city, partly to deflect accusations that it is biased in favor of the eastern city of Benghazi, cradle of the revolt against Gaddafi.

“I think he was elected because he is from Tripoli,” he said, adding that the NTC wanted to “balance things” and show Tripolitans that the interim council is genuinely inclusive.

The NTC, formed in Benghazi early on in the rebellion, has been criticized for its slowness in moving to the capital.

Keib may also have been chosen because more ambitious politicians are waiting for national elections, when the interim premier will have to resign. Keib’s predecessor, Mahmoud Jibril, quit, as he had pledged, when Libya declared itself liberated.

The NTC has promised to hold elections after eight months for a national assembly that will then be given a year to draw up a new constitution before a parliamentary poll.

Described by one of his former Libyan students as “a gentleman,” Keib has worked as a professor of electrical engineering at the University of Alabama. He has also held posts in the United Arab Emirates.

A biography on the website of The Petroleum Institute in Abu Dhabi, where Keib is listed as chairman of the electrical engineering department, gives his graduation with a bachelors degree from the University of Tripoli in 1973, followed by a masters from the University of Southern California in 1976 and a doctorate from North Caroline State University in 1984.

“Some say it’s very hard for him to do this job because he was outside Libya for so long (and) he doesn’t know what’s going on inside,” said Atrash. “I don’t agree. This is the old view, it’s not a one-man show any more. The NTC is a team.”

“Within the NTC, what you see is democracy in practice. This is new for us in Libya,” he said.

“This transition period has its own challenges. One thing we will be doing is working very closely with the NTC and listening to the Libyan people.”