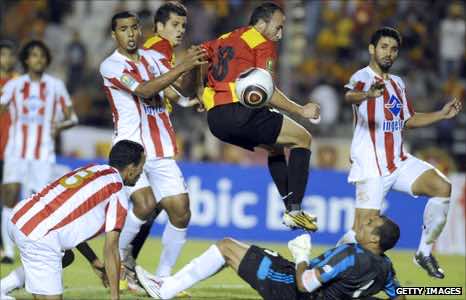 Tunisian club Esperance is hoping to shake off the “bridesmaid” tag that has stuck to them in the African Champions League for many years starting this weekend in the Orange CAF Champions League final. The Tunisians face Wydad Casablanca in a two-leg final with the first at the Mohamed V Stadium in the Moroccan commercial capital on Sunday and the return match in Tunisia six days later.

After defeating defending champions Zamalek of Egypt 3-1 overall in their first final appearance 17 years ago, the ‘Blood and Gold’ reached three more and lost each one.

Raja Casablanca of Morocco pipped them for the 1999 title after a Tunis penalty shoot-out and the pain was even more severe a year later when they were beaten at home and away by Hearts of Oak from Ghana.

But nothing that had gone before in countless African campaigns since 1971 prepared Esperance for the humiliation of last year when they were crushed 5-0 away to Democratic Republic of Congo outfit Tout Puissant Mazembe.

Adding insult to injury was crowd trouble during the return match which ended 1-1 in a near deserted 60,000-capacity national stadium on the outskirts of the Tunisian capital.

It was only the second time in the 47-year history of the premier Pan-African club competition that a final had been won by a five-goal margin with Algerian outfit JET crushing Congolese rivals Vita three decades ago.

Esperance rang the changes on the field and in the dugout and one year later they are back in the final and most African football pundits are backing the Tunisians for a second title.

The clubs also clashed during the group stage with Wydad coming from two goals behind to draw 2-2 at home before erecting a defensive barricade in Tunis and forcing a goalless stalemate.

Esperance had the less stressful semi-finals passage, achieving a noteworthy 1-0 victory over Al-Hilal of Sudan in sauna-like Omdurman before winning 2-0 behind closed doors at home.

Crowd trouble has plagued several Tunisian clubs in Africa this year and the ‘Blood and Gold’ were punished for incidents during a 4-0 drubbing of Algerian side Mouloudia Alger in another mini-league encounter.

Esperance boast a 23-6 goal tally from 12 matches en route to the final and lost only once — a meaningless second round qualifier at ASPAC of Benin who had been thrashed 5-0 in the first leg.

Youssef Msakni, who claimed two of the goals that sank Hilal, tops the scoring charts with five and Cameroonian Yannick Ndjeng and Oussama Darragi have struck four each.

Malian Dramane Traore scored twice and Guy-Roger Toindouba once early in the campaign and another Cameroonian, giant defender Yaya Banana, got the goal in Egypt that forced a 1-1 draw with Al-Ahly and sealed Group B honours.

Coach Nabil Maaloul played for Esperance only to leave early in 1994, the year they conquered Africa by defeating Etoile Filante of Burkina Faso, Stade Malien of Mali, Iwuanyanwu Nationale of Nigeria, Mouloudia Oran of Algeria and Zamalek.

He is a deep thinker and not afraid to make unpopular decisions like leaving midfielder and club and national team captain Darragi on the bench away to record six-time champions Ahly.

“It was a tactical ploy because I knew Ahly would attack at home from the kick off. We had to press their midfield and I kept Oussama out because he is more an attacker than a defender,” explained the 49-year-old handler.

“Playing at home second will suit us although in the African Champions League you learn to take nothing for granted,” he said ahead of a showdown that will enrich the winners by 1.5 million dollars.

It will also give Esperance or Wydad a place at the FIFA Club World Cup between December 8 and 18 in Japan with Lionel Messi-inspired Barcelona and Brazilians Santos among a seven-strong field.