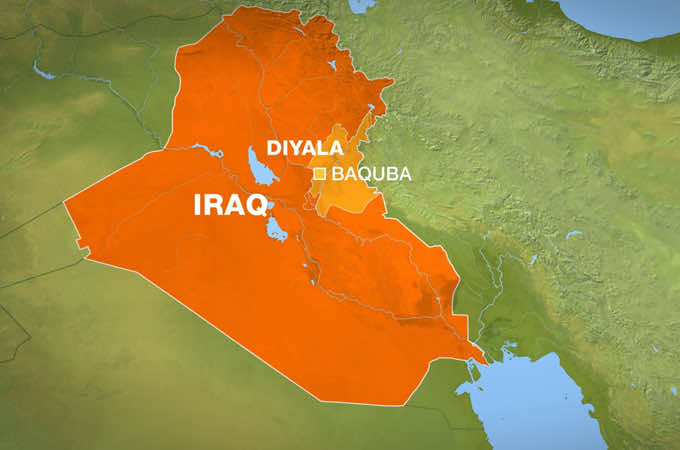 At least six security guards killed and dozens wounded as bombs go off in city of Baquba, northeast of capital Baghdad.

Two near-simultaneous bombings in the city Baquba, 60 km northeast of Baghdad, have targeted a line of security guards waiting to collect their salaries, killing six of them, Iraqi officials have said.

An interior ministry official said that a suicide bomber detonated himself around 8am local time on Thursday outside an Iraqi military base near the city, two minutes later a car bomb blew up about 30 metres away.

The dead were members of the Sahwa – a Sunni armed group that sided with US forces in a major turning point in the country’s conflict.

At least 35 people were wounded in the blasts, Faris al-Azawi, a spokesman for the Diyala Heath Directorate, said.

On Wednesday, at least eight people were killed and dozens wounded in three explosions in the southern city of Basra.

The blasts occurred outside three cafes on a street in the centre of the city where people gather in the evening to smoke traditional water pipes and play dominoes and backgammon.

“I was near my son’s cafe when I heard an explosion and quickly came to the area. I saw people lying on the ground, blood spots on the floor,” said Abu Abdullah.

“People were shocked and screaming. My son is amongst the wounded.”

Bombings and attacks remain a daily occurrence in Iraq nearly nine years after the US-led invasion that ousted Saddam Hussein. The number of people killed in October was the highest this year.

US President Barack Obama has announced that all US forces will withdraw from Iraq by the year-end in accordance with a 2008 security pact.

There are concerns that fighters will ramp up attacks as the 39,000 US troops left in Iraq begin to leave.