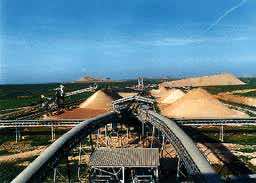 Morocco, the world’s biggest holder of phosphate reserves, expects a gap between global supply and demand to remain tight, supporting prices of the rock and its derivatives through 2012.

Phosphates and by-products such as DAP and MAP fertilisers are Morocco’s biggest export earners.

“Prices of phosphates and derivatives are supported by the persistence in the short-term of tight balance between supply and demand worldwide,” the finance and economy ministry said in a note on Wednesday.

Prices of phosphate rock stood at $197.5 per tonne in September, the ministry said, unchanged for a second consecutive month after posting a 41 percent increase from January to July.

“Beyond 2012, pressures on supply should fade in connection with the implementation of new production capacity in Morocco and Saudi Arabia through the Maaden project,” it said.

“But an expected strengthening of demand should gradually absorb this new input capacity, resulting in a return to the market equilibrium,” the ministry said.

“The increased use of fertilisers to raise crop yields is encouraged by historically high prices of agricultural and energy products,” it added.

For phosphoric acid, a key phosphate by-product, “the utilisation rate of the global production capacity will reach historically high levels in 2012, given high demand, delays in expansion projects and the announcement of plant closures”.

For DAP and MAP fertilisers, the ministry expects a decline in United States and Chinese exports “compared to the record level of 2010” to be plugged by an increase in Moroccan exports of the two products.

“Morocco is expected to capture much of the growth in global demand for these products in the medium-term,” it said.

An OCP spokesperson could not immediately comment on the ministry’s report. The government holds a 94-percent stake in the state-run phosphate monopoly.

A surge in global food prices in recent years has translated into higher receipts for OCP, partly helping to plug a growing trade deficit.

Exports of phosphates and its by-products netted 35.4 billion dirhams in the nine months to September, up 34 percent from the year-earlier period and 56 percent above the average over the past five years.

Exports of phosphate rock fell 7 percent in volume in the January-September period but the value rose 42 percent to around 9 billion dirhams after the average price per tonne climbed 53 percent, it said.

Exports of by-products of phosphate rose 7 percent in volume over the same period while their value increased 32 percent to some 26 billion dirhams on a 23 percent rise in the average price per tonne, the ministry said.