By Dan Levine and Noel Randewich 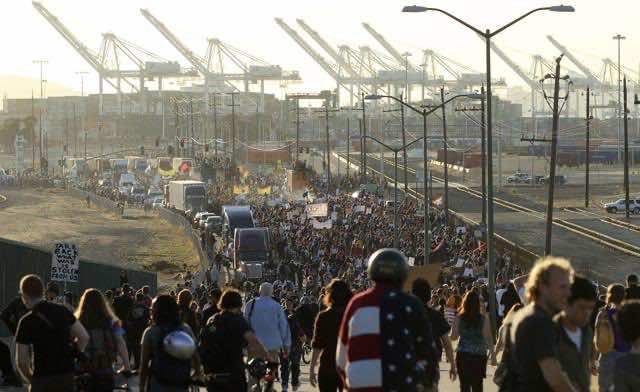 By Dan Levine and Noel Randewich

Protesters shut down operations at Oakland’s busy port and blocked traffic on Wednesday in demonstrations against economic inequality and police brutality that turned tense as the night wore on.

The protest by some 5,000 people fell short of paralyzing the northern California city that was catapulted to the forefront of national anti-Wall Street protests after a former Marine was badly wounded during a march and rally last week.

As evening fell, an official said maritime operations at the Oakland port, which handles about $39 billion a year in imports and exports, had been “effectively shut down.”

“Maritime operations are effectively shut down at the Port of Oakland. Maritime area operations will resume when it is safe and secure to do so,” the port said in a statement.

A port spokesman said officials hoped to reopen the facility on Thursday morning.

Protesters, who streamed across a freeway overpass to gather in front of the port gates, stood atop tractor-trailers stopped in the middle of the street.

Others climbed onto scaffolding over railroad tracks as a band played a version of the Led Zeppelin song “Whole Lotta Love,” using amplifiers powered by stationary bike generators.

“The reason I’m here is, I’m sick and tired of trying to figure out where I should put my vote between the lesser of two evils,” student Sarah Daniel, 28, said at the port.

The atmosphere turned tense after a protester was apparently struck by a car in downtown Oakland, and incorrect reports spread that the person had died. Acting Oakland Police Chief Howard Jordan later said the pedestrian was taken to a local hospital for treatment of non-life-threatening injuries.

As the night wore on, small groups were seen in local TV images running through the streets, trying to start small fires or climbing on top of moving television news vans.

At one point, several people appeared to force open the driver’s-side door of a news van, but after a few tense moments the door closed again and the van drove away safely.

The anti-Wall Street activists, who complain bitterly about a financial system they believe benefits mainly corporations and the wealthy, aim to disrupt commerce with a special focus on banks and other symbols of corporate America.

The demonstrations centered on Frank Ogawa Plaza adjacent to city hall, scene of a tug-of-war last week between police and protesters.

Protesters, prior to marching on the port, also blocked the downtown intersection of 14th street and Broadway, where ex-Marine Scott Olsen was seriously wounded with a head injury during a clash with police on the night of Oct. 25.

Windows were smashed at several Oakland banks and a Whole Foods market, with pictures of the damage posted on Twitter.

Few uniformed police officers were spotted at the rallies, but Jordan said demonstrators would not be allowed to march beyond the gates of the port. He blamed the vandalism and unruliness on a small group he identified as anarchists.

Local labor leaders, while generally sympathetic to the protesters, said their contracts prohibited them from proclaiming an official strike.

Oakland Unified School District spokesman Troy Flint said more than 300 teachers had stayed home, most of those having made formal requests the night before.

“We did have to scramble a little bit to cover the extra absences,” Flint said, adding that some classes were combined but no students were left unsupervised.

Other residents like Rebecca Leung, 33, who works at an architectural lighting sales company, went about their ordinary activities. Leung said she generally supported the protests.

“I don’t really feel striking is necessary. I work for a small company, I don’t work for Bank of America,” she said.

The owner of a flower shop near the plaza protest site, meanwhile, said weeks of noisy rallies and ongoing encampment had only served to hurt his small business.

“Business has not been the same. Everything has gone downhill around here, the noise, the ambience and the customers,” the man, who identified himself as Usoro, told Reuters. “I can’t afford to close down.”

Olsen remains in an Oakland hospital in fair condition.

Protest organizers say Olsen, 24, was struck by a tear gas canister fired by police. Jordan opened an investigation into the incident but has not said how he believes Olsen was hurt.

In downtown Seattle, about 300 rain-soaked protesters blocked the street outside the Sheraton hotel where Jamie Dimon, chief executive of the biggest U.S. bank, JPMorgan Chase & Co, was speaking at an event.

Earlier in the day, five protesters were arrested for trespassing after chaining themselves to fixtures inside a Chase bank branch, Seattle police said.

In Los Angeles, several hundred protesters marched through downtown in solidarity with their Oakland counterparts, while in Virginia protesters sought alarm whistles at their encampment in a public park in Charlottesville because women were concerned about their safety overnight.

“You’re seeing people who don’t really care about the Occupy movement, who are doing their own thing,” said Zac Fabian, a spokesman for Occupy Charlottesville.