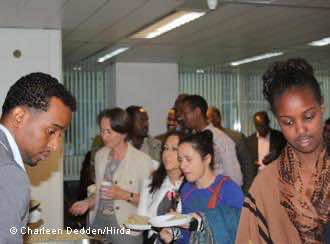 More than one million Somalis live outside their native land – but many in that diaspora have set out to help tackle some of Somalia’s biggest problems through NGOs formed in foreign countries, such as the Netherlands.

Fatumo Farah is one of about 32,000 Somalis living in the Netherlands. She is also the director of HIRDA, a Dutch-Somalian NGO that provides humanitarian aid, education and other support to Somalis back home.

Her organization recently held an awareness-raising event in Amsterdam. The program featured a performance by a trio of African musicians and a traditional Somali meal, as well as a documentary by a group of Somali filmmakers.

The film chronicles Farah’s journey back to Somalia – her first trip in 18 years. It was shocking for her to see the toll the drought and ongoing civil war had taken on her countrymen.

“You don’t see any color in the clothes of the people,” Farah told Deutsche Welle. “It was gray and black. And that shows the desperation of the people.”

In the film about her journey, hordes of refugees arrive at overcrowded camps on the Kenyan border, looking tired and emaciated.

One of the women interviewed talks of how she was forced to leave five of her children behind. They were alive, she said, but they were thirsty and weak, and she couldn’t bear to watch them die.

About 1.5 million Somalis are displaced within their own country, and hundreds of thousands more have fled to neighboring Kenya and Ethiopia. For two decades, Somalia has been plagued by civil war, and now it’s facing the worst drought in 60 years.

Abdishakur Elmi Hasan is a Somali journalist who moved to the Netherlands four years ago.

“The country I left is a country which is terrible at the moment,” he said. “There’s a war going between the so-called Somali government against the al-Shabab terror group, and every day people are dying and the situation gets worse when it comes to drought.”

Somalia is a land of clans, which have been unable to agree on a political way forward for the country. The transitional federal government, or TFG, is close to powerless and has few resources to fight against the numerous rebels.

On top of that, the rise of the al-Qaeda-backed al-Shabab militia has perpetuated the country’s instability.

Twenty years of civil war has also posed major problems in terms of education. Some 80 percent of Somalis don’t know how to read or write. Armed conflict and poverty is all the younger generations have ever known.

Hope in the diaspora

Somali writer Yasmine Allas has been living in Europe for 24 years. She talks proudly about growing up in Somalia but said it pains her to see how it looks now. Yet she is confident that Somalis living abroad can help.

“The hope is now within the diaspora; the diaspora has had experience with other intellectuals, with a different world with other norms and values, has seen how people deal with each other,” she said.

“They know how law and democracy work; how essential the freedom of speech can be to a society; how you can have your own opinion and respect that of others, even when you don’t agree.”

This diaspora numbers about one million Somalis around the world. The Netherlands is one of the top five destinations, with some 32,000 Somali expatriates.

Mohamed Elmi is one of them. He is a spokesman for the Dutch Federation of Somali Associations, which represents 57 NGOs that are actively helping Somalis back home or in the Netherlands.

Elmi left his country in 1993, when he was eight years old. He, too, believes that the Somali diaspora can play an important role in influencing the country’s future path.

Elmi said part of the problem is that ties to clan and tribal interests prevent local leaders from exploring a broader range of solutions.

Fatumo Farah of the NGO HIRDA also believes there are too many internal feuds going on within the Somali culture – but she said things are changing, nevertheless.

“You need a government that can provide services like education, health, security, all those things,” she said. “The clan issue is always there, but it’s getting less strong.”

Yet despite the fact that some expats also support certain clans over others, Farah said the diaspora provides an important contribution to Somalia.

The diaspora can also take on a mediating role in conflicts back home. Farah provided an example from 1994, when Somalis in the Netherlands helped two fighting clans reconcile. Now, the two groups are able to coexist peacefully.

“That’s an example of what the diaspora can do,” she said. “If they join their forces to contribute to the peace in Somalia, they can do a lot of things.”

Somalis in the Netherlands have also been actively campaigning against female genital mutilation, which affects about 95 percent of women in Somalia. Others have been providing technical knowledge to assist struggling farmers. And more recently, groups have been increasing their efforts to prevent young Somalis in the diaspora from joining radical armed groups.

Whether it’s on the ground or from abroad, there seems to be a strong sense from Somalis across the globe that they’ve got an important role to play in the future of their home country.