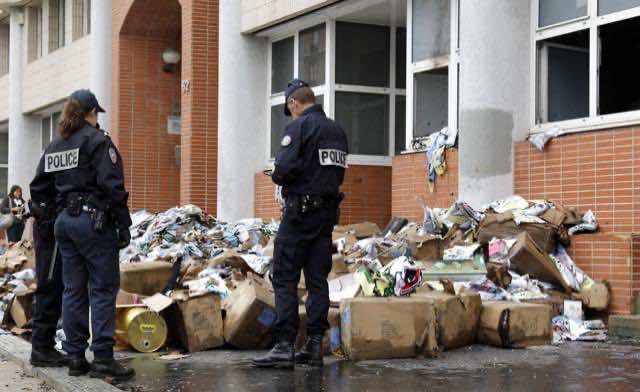 A French satirical weekly whose office was firebombed after it printed a cartoon of the Prophet Mohammed has reproduced the image with other caricatures in a special supplement distributed with one of the country’s leading newspapers.

The weekly Charlie Hebdo defended “the freedom to poke fun” in the four-page supplement, which was wrapped around copies of the left-wing daily Liberation on Thursday, a day after an arson attack gutted Charlie Hebdo’s Paris headquarters.

No one has claimed responsibility for the attack, which took place hours before an edition of Charlie Hebdo hit newsstands featuring a cover-page cartoon of Mohammad and a speech bubble with the words: “100 lashes if you don’t die of laughter.”

The weekly, known for its irreverent treatment of the political establishment and religious figures, bore the headline “Charia Hebdo,” in a reference to Muslim sharia law, and said that week’s issue had been guest-edited by Mohammed.

The incident pits Europe’s tradition of free speech and secularism against Islam’s injunction barring any depictions seen as mocking the prophet. The publication of cartoons of Mohammad in a Danish newspaper in 2005 sparked unrest in the Muslim world in which at least 50 people were killed.

While French Muslim groups criticized Charlie Hebdo’s work, they also condemned the firebomb attack. The head of the Paris Mosque, Dalil Boubakeur, told a news conference on Thursday: “I am extremely attached to freedom of the press, even if the press is not always tender with Muslims, Islam or the Paris Mosque.”

“French Muslims have nothing to do with political Islam,” he added.

Following the firebombing, Charlie Hebdo staff moved temporarily into the offices of Liberation. The two publications jointly produced Thursday’s supplement, which reproduced the Charlie Hebdo cartoon in an article on the back page.

One headline in the supplement said: “After their office blaze, this team defends the ‘freedom to poke fun’.”

“We thought the lines had moved and that maybe there would be more respect for our satirical work, our right to mock. Freedom to have a good laugh is as important as freedom of speech,” Charlie Hebdo editor Stephane Charbonnier said in the supplement.

France has Europe’s largest Muslim community, numbering about five million out of an overall population of 65 million. The country has a deep tradition of official secularism and adopted a ban this year on women wearing face-covering veils in public, which is being challenged in court.

Luz, the cartoonist who drew the cover cartoon at the center of the controversy, said it was still unclear who had carried out the attack.

“Let’s be cautious. There’s every reason to believe it’s the work of fundamentalists but it could just as well be the work of two drunks,” he said in the Thursday supplement.