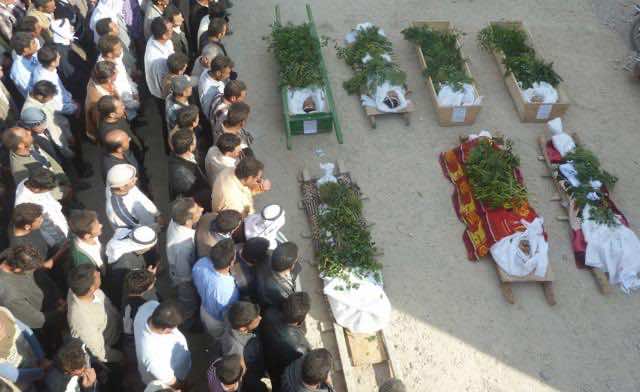 Syrian troops killed 20 civilians and arrested dozens on Thursday, a rights watchdog said, a day after Damascus pledged to withdraw its forces from protest hubs under a deal with the Arab League to end months of bloodshed.

As activists called for mass demonstrations on Friday to test the government’s commitment to the peace blueprint, the largest opposition group held talks in Cairo with Arab League chief Nabil al-Arabi to voice its concerns.

“We told the secretary general of our fears that the regime will not keep its promises,” said Samir al-Nashar, a member of the opposition Syrian National Council.

“We did not talk with the secretary-general about a dialogue with the regime,” council member Samir Nashar was quoted by Egypt’s MENA news agency as saying after the meeting.

“We discussed entering negotiations with the authorities to move from a totalitarian to a democratic system, and demanded that President Assad leaves power,” he said, according to Reuters.

The SNC is the largest and most representative Syrian opposition grouping. On Wednesday it urged the Arab League to freeze Syria’s membership in the 22-strong organization and recognize it as the sole representative of the opposition.

Implementing the plan “fully and rapidly”

“I welcome the efforts of the Arab League to end violence and bring about the reforms that the Syrian people have bravely demanded these last seven months,” she said in a statement.

Ashton added that the initiative could only succeed, however “if the Syrian authorities provide the space and security for opposition groups to work with all sectors of the Syrian population for a peaceful political transition.”

Assad’s opponents are skeptical about the regime’s readiness to rein in a brutal crackdown that the United Nations says has cost more than 3,000 lives since mid-March.

London and Washington said that despite Damascus’s agreement to the Arab League plan after weeks of prevarication, they still believed Assad must heed the demands of anti-government protesters and step down.

Hours after Syria agreed to the Arab plan its security forces pressed on with the crackdown.

Twenty people were killed in several flashpoint neighborhoods of Homs, the Syrian Observatory for Human Rights said, after an earlier toll spoke of nine dead.

Gunfire continued to explode across the city, which was pounded during the day with heavy machineguns mounted on tanks, according to activists.

Security forces also arrested “more than 80 people at dawn in Deir al-Zor (eastern Syria) and neighboring districts,” the statement added, according to AFP.

Tanks fired heavy machineguns and anti-aircraft guns in that city’s Bab Amro district, a hotbed of protests and scene of operations by the military against insurgents hiding there.

“We slept late because there were overnight street rallies celebrating the Arab initiative. This morning we woke up to rain and shelling,” Samer, an activist in Bab Amro, told Reuters by phone.

Under the hard-won deal announced at Arab League headquarters in Cairo on Wednesday, the Syrian government pledged to remove troops from all protest centers although no timetable is given.

Damascus also agreed to release people arrested since the anti-regime protests erupted in mid-March and to engage in a national dialogue with the opposition.

But the text, seen by AFP, did not specify a venue for the dialogue. That is a bone of contention between the government, which insists on Damascus, and the opposition, which says it should be outside Syria.

But skepticism prevailed among regime opponents.

“The regime has accepted the Arab initiative out of fear of Arab isolation, its weakness and lack of options. But its acceptance does not mean it will respect its clauses,” he wrote, according to Reuters.

The Local Coordination Committees (LCC), which organizes anti-regime protests, cast doubt over “the integrity of the Syrian regime’s acceptance of the points suggested by the Arab League’s initiative” and called for protests.

Syrians should stage “peaceful protests” to “validate whether armed forces… have been withdrawn from the cities and towns, and whether violence has been stopped, detainees have been released, Arab and international media correspondents have been allowed in the country and if a dialogue has been made possible,” a statement said.

“May tomorrow, Friday, be the day where all streets and squares become platforms for demonstrations and for the peaceful struggle towards achieving the downfall of the regime.”

The Arab League plan won international endorsement, with U.N. chief Ban Ki-moon saying it was vital that Assad’s regime now swiftly implement the terms of the roadmap “as soon as possible as agreed.”

The United States and Britain echoed his comments but agreed that the only real way to end the bloodshed is for Assad to step down because, as the White House said, he “lost his legitimacy to rule.”

China, which along with Russia, has resisted imposing U.N sanctions on Syria, welcomed the Arab League plan.

“We believe this marks an important step towards easing the situation in Syria and the early launching of an inclusive political process with broad participation from all parties in Syria,” Chinese Foreign Ministry spokesman Hong Lei said.

Despite the latest violence, Sami Baroudi, a political analyst at the Lebanese American University in Beirut, said it was too early to judge whether Syria would honor the agreement.

“It will take at least a couple of days to see whether the intensity of violence is going down or up, or staying at the same level,” Baroudi said. “I wouldn’t throw this initiative into the waste basket because nothing happened immediately.”

Early in the morning, an armored column fired machineguns in the air after entering al-Madiq castle near the Roman ruins of Apamea in the Ghab Plain, which has seen protests and has emerged as a refuge for army defectors, local activists said.

In the Damascus suburb of Harasta, at least 120 protesters were arrested overnight after celebrating the Arab League deal, a resident said.

Tough Syrian media restrictions have made it hard to verify events on the ground since an uprising against Assad began in March, inspired by other revolts in the Arab world.