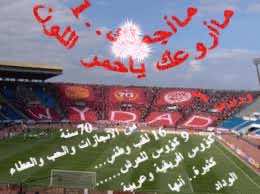 Wydad Casablanca of Morocco will be sharper and Esperance of Tunisia more experienced going into an African Champions League decider between clubs who suffer from ‘final fright’.

Casablanca hosts the first leg Sunday at the 70,000-capacity Mohammed V Stadium with the return encounter six days later at the slightly smaller November 7 Stadium on the outskirts of Tunis.

While Wydad lead the 2011-2012 national championship after five rounds with four victories and a draw, Esperance have had to settle for friendlies because the domestic season has not begun.

All North African nations follow the European example of spreading a football season over the second half of a year and the first half of the next although the kick-off date varies considerably.

So as Wydad stayed the top of the table last weekend despite being held goalless at lowly Jeunesse Laayoune, Esperance suffered a surprise 2-1 warm-up loss against promoted Bani Khelad despite being gifted the lead via an own goal.

Esperance are much more familiar with big occasions than Wydad, though, having played 155 matches in 17 African Champions League appearances since being held 0-0 by Libyan visitors Al-Ahly Benghazi 40 years ago.

Although they made little impression on their debut, the Tunisian ‘Blood and Gold’ have come a long way since, winning in 1994 and reaching three finals, three semi-finals and three group phases since 2000 in nine title challenges.

It is a record that places them among the elite of the last decade beside Al-Ahly and Zamalek of Egypt, fellow Tunisians Etoile Sahel, Tout Puissant Mazmebe of the Democratic Republic of Congo and Enyimba of Nigeria.

Wydad have created far less of an impact on the premier African club competition with one title in 1992 by far the best showing in seven appearances, most of which ended after the second qualifying round.

It seemed as if a similar fate would befall them this year when eliminated by defending champions Mazembe in a qualifier, but the club formed in 1937 won a reprieve because the Congolese were disqualified for fielding an ineligible player.

‘Final fright’ afflicts both clubs with Esperance winning four of eight African finals for a 50 percent success rate and Wydad faring even worse with two victories from five for a 40 percent rate.

Esperance have found the Champions League title a particularly elusive piece of silverware to get a grip of with the 1994 success over Zamalek of Egypt followed by three tumbles at the final hurdle.

The Tunisians lost on penalties to Raja Casablanca of Morocco in 1999 after a goalless two-leg final, 5-2 on aggregate to Hearts of Oak of Ghana one year later and 6-1 overall against Mazembe last November.

There was better luck in lesser competitions with wins over Daring Club Motema Pembe in the 1995 African Super Cup, Petro Atletico of Angola in the

1997 CAF Cup and Primeiro Agosto of Angola in the 1998 African Cup Winners Cup.

But an attempt to raise the Super Cup a second time in 1999 came unstuck in the Ivory Coast against ASEC Mimosas, who scored twice in extra time to complete a 3-1 triumph.

A couple of late first-leg goals earned Wydad victory over Al-Hilal of Sudan in the 1992 African Champions League final and 10 years later they pipped Asante Kotoko of Ghana on away goals for the African Cup Winners Cup title.

The Moroccans had no joy in the Super Cup — failing against Africa Sports of Ivory Coast in 1993 and Zamalek in 2003 — and the away-goal rule proved their undoing in the 1999 CAf Cup decider with Etoile Sahel of Tunisia.

Apart from the satisfaction of being branded the best football club on the continent, the 20011 African champions will pocket 1.5 million dollars and gain entry to the even more lucrrative FIFA Club World Cup during December in Japan.