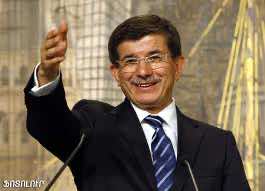 Announced initially as being invited to the Medays Forum, organized in Tangier by the Institute Amadeus of Brahim Fassi-Fihri, the son of the Moroccan Minister of Foreign Affairs, Taib Fassi-Fihri, Turkish Foreign Minister Ahmet Davutoglu has confirmed that he will pay an official visit to Morocco from November 15 to 16.

He will hold talks with Moroccan officials and attend the very official 4th Turkish-Arab Forum. The only problem in this story is that from the start, advisers of the Moroccan Ministry of Foreign Affairs are the ones who were in contact with Ahmed Davutoglu’s aides.

Indeed it was Nasser Bourita, Secretary General of the Department of Foreign Affairs of Morocco, who, during his visit to Ankara, announced the program of the trip of the head of Turkish diplomacy to the kingdom.

The succession of these events has not failed to raise many questions among political parties in Morocco who stressed that the Amadeus Institute, an independent institution in principle, learned of the visit of the Turkish Minister before it was officially announced.

Many of them note that this confusion between a private institution run by the son of the minister and the ministry’s departments, creates a growing unease within the department. Some of the executives of this ministry sincerely hope the end of the Taib Fassi-Fihri era, which, despite some successes, has been a bleak period for the Moroccan diplomacy.

The election of Morocco as a non-permanent member of the Security Council is more the result of the rotation between the States than the result of an effort of the Ministry of Foreign Affairs.

Moreover, and on the eve of parliamentary elections that should result in the departure of Taib Fassi-Fihri, many observers question how long the Amadeus Institute will survive a possible and more than likely change of incumbent at the helm of the Ministry of Foreign Affairs.

The views expressed in this article do not necessarily reflect Morocco World News’ editorial policy.