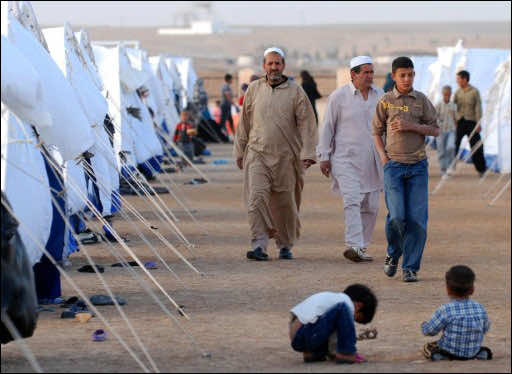 Historic changes sweeping the Maghreb are causing unprecedented migratory movements. In Algeria alone, more than 94,000 migrants arrived in just the past year.

A recent workshop in Algiers examined regional migration trends and the impact of war, revolution and economic hardship on refugee flows.

Participants in the October 25th seminar discussed the security and social challenges posed by the increased immigration, as well as ways to protect migrants and manage the influx. Experts called for the creation of a regional mechanism to monitor the phenomenon, whether related to immigrants seeking asylum for political or social reasons or refugees.

The event was organised by the Algerian National Consultative Committee for Promotion and Protection of Human Rights (CNCPPDH) in co-operation with the Italian Refugee Council.

Dealing with the mixed immigration phenomenon will inevitably be through legal channels that guarantee the dignity of immigrants and refugees, as well as the interests and security of countries suffering from the fallouts of this phenomenon, according to Farouk Ksentini, president of the human rights group.

On the sidelines of workshop, Ksentini stressed the need for the countries affected to prepare a suitable legal arsenal allowing them to protect the rights of immigrants and refugees on the one hand while preserving their domestic security and stability on the other hand.

More than 94,000 mixed migrants have entered Algeria in the past year, according to Yasmina Taya, chairperson of the permanent sub-committee for foreign relations and co-operation at CNCPPDH. She attributed the numbers “the revolutions taking place in Algeria’s neighbouring countries”, adding that “the figure is likely to rise”.

“Algeria has always respected refugees’ rights and worked on protecting them from the humanitarian perspective as per international agreements and treaties,” she said. “Algeria is proceeding at that direction although it has turned from a transit country to a settlement country because of the current developments.”

In the meantime, she stressed the need to differentiate between several of forms of immigration and deal with each separately. “We can’t consider the movements of Touareg tribes, which are part of their exercise of their normal freedoms, to be the same as the immigration of people fleeing armed conflicts or immigrants trying to improve their living conditions in European countries illegally,” Taya said.

European countries need to do their part to resettle refugees in their native countries, according to Christopher Hein, director of the Italian Refugee council.

“We have particularly criticised the border closure policy which the EU has called for,” he added, noting that the EU usually asks transit countries to manage the influx of immigration.

However, he noted that some refugees, like those fleeing the war in Libya, may not be able to return to their homeland.

Algerian sociologist Homaed Saib Musette said the country needed a national strategy to manage immigration, as well as a system to track and measure the refugee flow.

“There is partial data, and we don’t precisely know the influx of foreigners who are now legally or illegally residing on our soil. We don’t even know the percentage of Algerians who depart from the country every year,” he said.

Musette ascribed this situation to the fact that “there is no legal framework binding countries to give more explanations for the movements of immigration”.

The researcher also addressed events in North Africa, especially the management of borders, which has become “a very complex issue threatening to turn Algeria into a closed space where every movement becomes suspicious”. He called for establishing a surveillance centre, and a body to care for Algerian nationals coming from neighbouring countries, such as the 8,000 Algerians who have returned from Libya.